Pope is a public media and non-profit executive with more than 20 years’ experience, including KSJD in Cortez, Colorado, and Aspen Public Radio. A self-described “systems-level” thinker and leader, he is known for his capacity to energize staff, donors, and volunteers to make an organization’s work relevant to the community, and for applying business and philanthropic acumen to sustain these efforts.

At KSJD Pope organized regional news collaboratives and strengthened engagement by bringing public media and the arts to the center of their community. Pope is a bilingual English/Spanish communicator, and he and his partner Della are raising three boys, aged 12, 10 and 6.

“I’m thrilled to be asked to lead Blue Ridge Public Radio at a time when Western North Carolina needs the station more than ever to be a trusted source for journalism, a resource for the arts and culture, and an institution that pulls the region together,” says Pope. “My family and I can’t wait to explore all that Western North Carolina has to offer and become part of the community.”

John Noor, chair of BPR’s board of directors, said that Pope brings the experience, vision and passion to guide BPR during this crucial time. “His values align with the station’s, and his talents will empower BPR staff to build on recent successes, authentically engage in Diversity, Equity and Inclusion efforts, and embrace new opportunities to serve all communities in our region.”

Noor is thankful for Vogelzang’s leadership as interim General Manager. “Mark brought decades of wisdom and experience to the station in his time at BPR. He provided forward-thinking counsel to board, staff, and incoming leadership and we wish him the best in his new role at KNPR Radio.” Noor continues, “In the meanwhile, we’re delighted that Andrew Todd will assist in the transition and set the stage for Jeff’s arrival in July.”

This leadership announcement comes at an exciting and evolving time for BPR, as the station has welcomed several key hires in recent months, including on-air host Anastasia Marie, announcer Mike Martinez, and operations coordinator and announcer Éowyn Fain. In October 2021, BPR expanded its service in Jackson County by launching a transmitter of its all news and information channel, BPR News, on 90.5 FM in Cullowhee.

The station is also working on several crucial community engagement projects, including a revamped Community Forum advisory group and being selected for the national initiative America Amplified to deepen the impact of public media journalism. 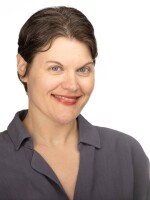 Erin Adams
With more than 15 years of nonprofit experience, Erin joined BPR in January 2020. She previously worked in digital marketing at NTEN in Portland, OR, marketing and communications at NPR in Washington, DC, and membership coordination at Nashville Public Radio in Nashville, TN. She began listening to The Diane Rehm Show on her father’s car radio in middle school, and she’s been a sustaining member of public radio stations across the country ever since.
See stories by Erin Adams