If you listen to the latest round of gubernatorial campaign ads, you’d either think teacher pay has skyrocketed or plummeted under Governor Pat McCrory. Neither is the case. There's also more to the story of a teacher highlighted in a Roy Cooper ad.

Cooper's latest ad for governor begins with the display of these words: "August 2016, a true story." There's a modest home with a U-Haul in the driveway. Then, you see a young woman packing up boxes in a kitchen. 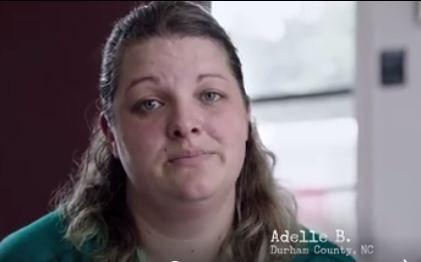 "At first, I was so happy to teach in North Carolina, but we've fallen to 41st in teacher pay," she says.

For many years North Carolina was in the middle of the pack, but wages began to stagnate in 2009. In 2014, McCrory and state lawmakers agreed to raise teacher salaries and, yes, as McCrory boasts in a recent ad and "gave teachers the largest pay-raise in the country."

That brings us back to the teacher packing boxes in Cooper's ad.

"Like over 2000 other teachers, I'm having to move to another state so that I can do what I love and make ends meet. Someone needs to fix this," she says.

The teacher is identified simply as Adelle B in Durham. Cooper's campaign did not give WFAE her full name and did not respond to interview requests. The McCrory campaign has identified her as Adelle Banister. We've also found that appears to be the case.  She's a P.E. teacher who left Durham Public Schools for a teaching job with the district in Roanoke, Virginia. It didn't take a much higher salary to lure her there. Her salary is $42,940, just $190 more than in Durham. The cost of living is similar according to the Council for Community and Economic Research.

Now, back to the first part of her statement.

"Like over 2,000 other teachers, I'm having to move to another state."

Maybe. But spread out over a few years. Last year, 1,028 teachers left North Carolina to take teaching jobs in other states. That's the latest data the state has on that. Back in 2008, it was 467.

One thing Cooper's ad does get right, is that North Carolina is now ranked 44th in per student funding. The state and local districts spend an average of $8,898 per students. That's about how much they spent on students in 2009. That's not adjusted for inflation.

New McCrory HB2 Ad Implies A Link That Isn't There

Governor Pat McCrory’s reelection campaign is out with a provocative new ad.

It’s a testimonial, featuring a survivor of sexual assault speaking in favor of House Bill 2.

But the ad may give the wrong impression of the circumstances surrounding her assault.

It’s not the content but the context of the ad that raises questions.

The Democratic Governors Association confirmed this week that Biden will participate in its Sept. 12 private fundraising event at a Raleigh home. The association considers McCrory's seat the best chance for Democrats to flip a gubernatorial seat that a Republican now holds.

On this episode of the WUNCPolitics Podcast we focus on a single, perhaps defining, topic in the race for the next Governor: Pat McCrory's record on teacher pay. It’s an issue upon which he may very well be pinning his re-election hopes.

Updated 8/2 7:25 am (Associated Press): Gov. Pat McCrory decided against signing one bill sent by the legislature because money appropriated to defend House Bill 2 originated from a disaster relief fund.

The bill became law without McCrory's signature as a deadline passed Sunday night. It contained many tweaks to a larger budget measure, including $500,000 for the governor's office for legal costs of defending House Bill 2, which limits anti-discrimination rules for LGBTQ people

On this edition of the WUNCPolitics Podcast, the NBA takes a big swing at North Carolina and Governor Pat McCrory swings back.

We are in-between conventions, and some North Carolina Republicans are still hitching a ride back from theirs'. And Donald Trump and Hillary Clinton are about ready to launch strategies they hope will win the state.