A Year After Hurricane Matthew, Kinston Works To Prepare For Next Disaster 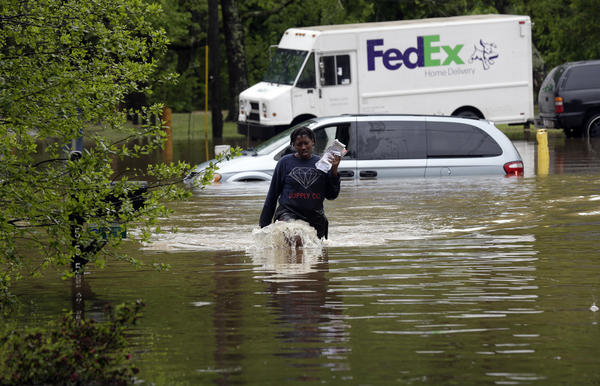 A year ago, Hurricane Matthew dumped a dozen or more inches of rain on central and eastern North Carolina. Record flooding in the days following the storm devastated communities downstream.

In all, 26 people in North Carolina died, farmers lost billions of dollars in crops and livestock, and cities along North Carolina's major rivers were waterlogged for weeks.

In places like Kinston, the Neuse River crested at a record high. A little more than six months later, it took no more than a spring thunderstorm to produce more major flooding in the city.  Since then, Kinston Mayor BJ Murphy has tried to shift the conversation from recovering from the last disaster to preparing for the next one.

As part of a series on the first anniversary of Hurricane Matthew, Murphy spoke with WUNC's Will Michaels to examine what it will take for North Carolina to be ready for the next major storm.

Remind us of the fallout from Hurricane Matthew. When you were able to get out and look at your city, what did you see?

Well, the night of - after the storm passed - I left the emergency operations center at about 2:30 and I will tell you, my community looked like the apocalypse actually happened. One of our main thoroughfares is Vernon Avenue. It's got a Bojangles, an auto parts store and a mall, things like that. There were cars all over the place. You could tell people were either scared and got out or the flash flood got it. By that time, the tow trucks were starting to roll out. All the power was out. It was also early in the morning, but it was kind of eerie.

It look six months for another major flood to happen. That was May of this year. How did that one in particular change things for you?

What was interesting about the timing of that is that we had already started having this "What do we do next?" discussion, and the day of those showers and the flood started coming in, I was literally sitting in Sen. (Richard) Burr's office in D.C., and I showed him my phone (a picture) of a business owner that morning whose business was flooding again. What do you do? These properties were not built in a flood zone. They weren't. But that has occurred now largely, in a lot of our opinions, because of the tremendous growth upstream. Kinston is becoming a natural dam. The river kind of snakes through our community, and all the water from literally northwest of Durham is coming all the way to Kinston. It's just getting here a lot faster and there's a lot more of it. And just a simple spring rain shower now has the ability to have a "Chicken Little" kind of effect. The sky really is falling. What do we do?

It was the last time there was a report on the infrastructure of what's necessary in the Neuse River Basin. That last two of three studies have been environmentally focused. It's the last report that actually spoke to what reservoirs should be built. It was the one that called for the Falls Lake Dam, which was ultimately built and completed 16 years later in 1981, but it also called for 12 other dams, and only one of them was built. I was in the emergency operations center here in the Raleigh area not too long ago, meeting with some officials, and the discussion was what if the other ones were built as well? And our impacts from Matthew would have been significantly less.

On the federal side, we basically need one major thing, and that is Congress to pass legislation to demand or instruct the Army Corps of Engineers to study the Neuse River Basin on an infrastructure basis. They've got to do the environmental study, too, but honestly, it's going to take not one act, but two acts of Congress: one to study it and the second one to fund the study. That's a three-year study. It could take them six years. I'm 37. I have a nine-year-old. That puts her at 15, and then you're talking about finding the money to implement those findings. I'll be a grandfather before something on the infrastructure from the federal level actually gets implemented.

You're 37 years old. You've seen how many major floods?

Four of the highest six crests we've ever had.

That fact, in particular, seemed to be what spurred you toward this.

It was knowing that this is not going to get better. This is going to get worse and those April showers proved it. I will tell you this. This is my third governor. I've served for eight years, so I was with (Gov. Bev) Perdue when she was in the emergency operations center in Kinston. I was with (Gov. Pat) McCrory. And I was almost with (Gov. Roy) Cooper with this last one. I thought that was going to happen, but we got lucky. I will tell you from a state perspective, we're prepared. Local government, state government and National Guard, we're all on the same page.

We're really good at preparing and responding to disasters. What we're not really good at is the routine maintenance of what's happening with our creeks and rivers. So far, we haven't been good at understanding the impervious surfaces in the Triangle and how that affects the water flow downstream. And we're not really good at understanding the need for some real significant infrastructure changes in terms of do we need reservoirs? Do we need to dredge the river so we can alleviate some of the unnecessary flooding that we're getting.

What do you need to have happen?

What we really need is the attention put on flood mitigation, and not as much on how many billions of dollars we need for flood recovery. We still need that. Don't get me wrong. But it is much easier to hand out money and for politicians to look good after disasters happened. We fly in the helicopter, I did it. We're standing by the bridge where it's flooded, I did it. It's easy to do that. It's hard to say, "Let's take $5  billion of the $15 billion, and let's put that into building a reservoir, dredging the river, helping the beavers, or putting the creeks and rivers back to a more pristine condition. That is the hard work, and that's what needs to happen.

What's the one greatest accomplishment that you and your city have had since then?

I remember going through that week literally standing on a picnic table. There were about 300 or 400 citizens, and we literally held a prayer gathering. It was run by our teenagers. It was just a beautiful event. And from there, we literally went and filled up sandbags, and knocked on people's doors to get them out of harm's way. It's just unfortunate that all the other things get the attention. My experience is when the worst of things have happened to our communities, the best of our people really come out.

Gov. Roy Cooper made another visit to Kinston as it continues to recover from Hurricane Matthew.

The city was one of the hardest hit from the storm's record floods in October.

The town of Princeville is stepping up recovery efforts after flooding from Hurricane Matthew last fall.

'Shock And Disappointment' Over Lack Of Matthew Relief Funding

Listen
Listening...
/
Jay Price reports on the slow recovery some cities are going through after Hurricane Matthew.