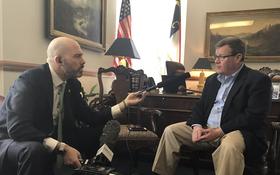 On this edition of the podcast, North Carolina House Speaker Tim Moore speaks with Capitol Bureau Chief Jeff Tiberii. Moore (R-Cleveland) is in his 8th term of the House and his 2nd term as speaker. A day earlier in his office, Moore held a news conference to talk about House Bill 2, one year to the day after its passage. The Speaker said the bathroom provision will not be changed under his watch. He also indicated that a proposal to change the bill is being worked on, along with Senate leader Phil Berger, and could be introduced next week. Moore said that bill would include a "conscience protection" provision. The speaker was asked about that, as well as beer, basketball, President Trump and the Oklahoma City bombing, during the conversation.

Listen
Listening...
/
A conversation with NC Speaker of the the House Tim Moore.

The Republican majority in the North Carolina House of Representatives was often divided this year. In July, members met for hours behind closed doors and narrowly approved re-organizing the seats on the Greensboro City Council. In September, the 74 members of the Republican caucus were divided and eventually defeated a plan that would have overturned city and county nondiscrimination ordinances across the state. House Speaker Tim Moore said he negotiated with libertarian members of his caucus to approve a plan to offer incentives to companies willing to move to North Carolina. He said he held regular meetings to negotiate other compromises. Yet, in his opinion, divisions were few.