Winter Is Coming... Later And Later 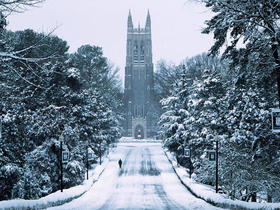 Winter is coming, later and later. And then spring comes ever earlier.

Analyzing freeze dates from the National Oceanic and Atmospheric Administration (NOAA) shows that the days between the first freeze of fall and the last freeze of spring are shrinking.

NOAA reports freeze information from 19 locations around North Carolina, including coastal, piedmont, foothills and mountain sites. Looking at the first and last freezes over any period shows there are fewer days between freezes now than there were in previous decades.

To climate scientists, these data mean only one thing.

"Shorter winters mean less snow on the ground in the fall (winter not here yet) and in the spring (winter left earlier), which leads to the Earth absorbing more sunlight that would have been reflected by the bright snow," according to Drew Shindell, professor of Climate Sciences at the Duke University Nicholas School of the Environment. "This is a positive feedback that accelerates global warming."

Megan Mullin, a Duke University associate professor of Environmental Politics and Political Science, notes that shorter and warmer winters – not longer, hotter summers – have been more common as the globe warms. Because people generally like more temperate climates, this actually reduces the urgency to fight global warming.

"Because much of how we interpret climate change is through our direct experience with weather, these changes don’t help in signaling the severity and urgency of the problem," she said.

Mullin co-authored a New York Times op-ed under the title "Global Warming Feels Quite Pleasant" that drives the point home.

Looking ahead, much of the U.S. should expect another warm winter, but not quite as toasty as the last two years, according to NOAA forecasts reported by the Associated Press.

The big driver in the forecast is a La Niña weather event that is likely to develop next month. La Niña, the flip side of El Niño, is the periodic cooling of the central Pacific Ocean that affects weather patterns around the globe, according to the AP. There was a La Niña for the early part of last winter. The 2015-2016 winter was record warm, about 4.55 degrees hotter than normal.

A Climate-Health Connection In WNC

If you suffer from allergies, you may have noticed you sneezed a little longer this fall.  But you may not have linked that extra sneezing to global warming.  Scientists and Public Health officials met in Asheville last week for a workshop on the climate health connection.  BPR’s Helen Chickering reports.

A Visit To One Of NC's Largest Solar Farms

On a country road south of Monroe in Union County, near a golf course and soybean fields, is a new kind of farm - a solar farm.  This spring, Duke Energy began generating electricity from 684,000 solar panels here, the largest solar farm in the Charlotte region and one of the largest in the state.

A North Carolina environmental group is asking the NC Supreme Court to decide whether it's legal for it to install solar panels on a church rooftop, then sell electricity to the church.  NC WARN is appealing a 2-1 ruling against it last month by the NC Court of Appeals.

The state Court of Appeals panel split 2-1 Tuesday, with the majority ruling in favor of Duke Energy's legal monopoly to sell electricity to most of the state. The split means a state Supreme Court appeal is possible.