Who's Who In Developing A Plan For Silent Sam

As Silent Sam – and its remnants – sit in an undisclosed location somewhere on the UNC-Chapel Hill campus, a small group of people are working behind the scenes to determine its future.

That process is more unclear than ever, as Chancellor Carol Folt is out at the end of this month, and Dr. Bill Roper has been interim UNC System President for only a few days.

Still, Board of Governors’ Chair Harry Smith says the March deadline for a new plan for the Confederate statue is unchanged.

“We are going to stay focused on doing what we were doing,” Smith told reporters on Tuesday. “I think it was absolutely the right path. It was proper process, proper governance, the right stakeholders involved.”

So who are the people who will design this plan? Let’s start with the person at the top.

Who is he? Chairman of the UNC Board of Governors; former executive at Flanders Corp., a filter company; from Greenville, NC; graduate of East Carolina University

Smith told BusinessNC Magazine that Sen. Phil Berger called him and asked him to serve back in 2012, to which Smith said: “I didn’t even know what the Board of Governors was.” Despite that, he has quickly moved up to the top leadership position, sometimes with sharp elbows. Some colleagues praise him for how quickly he has learned the ins and outs, and his energy. But in that same BusinessNC article, former Chair John Fennebresque said of Smith: “My mother taught me years ago that if you can’t think of anything good to say about someone, don’t say anything. I have nothing to say about Harry Smith.”

What does he think about Silent Sam? Smith is not a fan of how it was torn down by protestors, and called for an independent review of how police acted that night.

A few days after the statue came down, Smith sent an email (first reported by the News and Observer of Raleigh) to UNC System President Margaret Spellings that made his position clear: “It’s my intention to bring a vote to this governing body that will demand the statue be put back in place in a defined time line.”

Smith does not believe the statue could be moved legally, given the 2015 state law that bans removal of monuments from public property.

“Neither UNC-Chapel Hill nor the UNC System have the legal authority to unilaterally relocate the Silent Sam statue,” he said in a statement last summer.

Smith’s challenge is a big one: find a consensus on a 28-member board that includes moderate Republicans who prefer a quiet, expedient solution, and a vocal, hard-right wing that includes Thom Goolsby. Tom Fetzer, and others, who are outspoken in their desire (similar to his own) to see Silent Sam returned to its prominent location on McCorkle Place. And that’s not even considering the near-consensus view on UNC-Chapel Hill’s campus that Silent Sam should never again grace the well-manicured pathways of the Southern Part of Heaven. 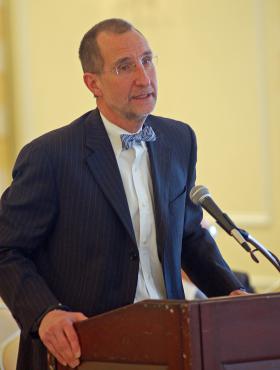 Who is he? Interim President of the UNC System since Tuesday; former CEO of UNC Health Care; former White House Advisor and director of the Centers for Disease Control under George H.W. Bush; devoted watcher of The West Wing.

How did he get here? Appointed to serve as interim President when Margaret Spellings announced she was leaving midway through her five-year contract. Says Smith: "Bill was the No. 1 choice, in my mind. When I called Bill and we had our first conversation, I whispered to myself, 'Thank God.'"

Roper is registered as an “unaffiliated” voter, but he has given significant amounts of money to Republicans (and some to Democrats). That includes Republicans like George W. Bush, Orrin Hatch, Richard Burr and the North Carolina Republican Executive Committee, and Democrat Jay Rockefeller.

What does he think about Silent Sam? Roper has not offered a public opinion. He has also not specifically said if he will seek the President’s job on a permanent basis.

“I'm looking forward to having supper with my wife tonight, and we'll work on tomorrow,” Roper said when his new role was announced. “We're not worried about weeks and months in the future. That'll take care of itself."

The Five Members of the BOG’s Silent Sam Committee

Who are they? How did they get here? And what do they think of Silent Sam? Darrell Allison, Jim Holmes, Wendy Murphy, Anna Nelson and Bob Rucho. They were selected to work with unnamed UNC-Chapel Hill personnel behind closed doors to come up with a plan for Silent Sam, after the BOG rejected the plan presented by Folt and the UNC-Chapel Hill Board of Trustees to build a $5.3 million building to house it.

All five were appointed by the Republican Legislature. Let’s look at them one at a time:

Darrell Allison: Appointed in 2017 to fill out a vacant seat; term ends 2019. Allison is the only member of this committee with a UNC-Chapel Hill degree (law). He founded Parents For Educational Freedom, an influential school reform organization that advocates for charter schools and vouchers and that worked very closely with Republicans on legislation that overturned the cap on charter schools. He has not expressed a public opinion on Silent Sam, but he did “abstain” from a controversial vote that banned the Center for Civil Rights at UNC-Chapel Hill from litigating against state entities on behalf of clients, despite expressing admiration for Julius Chambers, the former director.

Jim Holmes: Appointed in 2015; term ends 2019. Graduate of NC State; owns a risk management/insurance firm. His most significant impact on the Board of Governors was in his role as the leader of the review that led to the closing of three university-based centers – including The Center on Work, Poverty and Opportunity at UNC-Chapel Hill. It was a move many saw as punitive against that center’s outspoken liberal leader, Gene Nichol. It was a significant moment that ushered in a new era of micro-management into campus affairs by the BOG, something the Board had long avoided. Holmes has also avoided commenting specifically on Silent Sam, but he was a signatory on a letter from fellow Board member Tom Fetzer in August, 2017 that criticized Spellings and former Chair Louis Bissette for their handling of Silent Sam.

Wendy Murphy: Appointed in 2017; term ends in 2021. Graduate of UNC-Wilmington; family owns Murphy Family Ventures, which includes a sprawling development off of I-40 in Wallace, NC. She is arguably the most “bi-partisan” member of this group. She is a registered “unaffiliated” voter, and has cast ballots in Republican and Democratic primaries in relatively equal number. Her only significant political donation has been to the NC Pork Council, although family members are very active political donors, most recently to Republicans. She has not expressed a public opinion on Silent Sam, but did sign the same letter as Holmes in 2017, criticizing Spelling and Bissette.

Anna Nelson: Appointed in 2014; term ends in 2019. Graduate of Wellesley College and Harvard Business School. Nelson is the daughter of C. D. Spangler, the billionaire Charlotte businessman and former UNC System president (1986-97) who passed away last July. Nelson was the lone vote in committee against banning the UNC Center for Civil Rights from litigating against state and local governments, thus staking out a position much different from her fellow Board members. She said it was an “overreach” for the Board to get into campus matters. Her family is a major donor to political campaigns, both Republican (Thom Tillis) and Democrat (Mel Watt). She has not expressed a public opinion on Silent Sam.

Bob Rucho: Appointed in 2017; term ends in 2021. Graduate of Northeastern University; DDS from Medical College of Va.; MBA from UNC-Charlotte. Rucho is a dentist, and was a state senator for 17 years. He lost his bid to rejoin the General Assembly in November. His greatest claim to fame (or infamy, depending on one’s view) is his role in gerrymandering efforts in the General Assembly; he now has his name on one of the iconic lawsuits on the issue. He also was the most prominent defender of the Voter ID law that passed in 2013. It was later overturned and deemed by a Court of Appeals to have targeted African-Americans with “almost surgical precision.” Rucho, along with Fetzer and Thom Goolsby, is considered to be among the most conservative and hard-line members of the Board of Governors. He has not expressed a specific public opinion on Silent Sam.

The group above has until March 15 to present its Silent Sam plan to the full Board of Governors.