When A Rural NC Health Clinic Closes, Patients and Doctors Feel The Squeeze

It’s early afternoon on a recent Tuesday and Dr. Francis Aniekwensi is preparing to see his twentieth patient of the day.

“We don’t discriminate. We see children, we see adults, we see geriatrics,” Aniekwensi said. “We are family physicians. So, you see them from their cradle to their grave.”

Aniekwensi is a partner at Beckford Medical Center. He and Dr. James Kenney operate Beckford clinics with locations in Franklin County, Vance County and here in Warren County.

And when Aniekwensi is not here, Kenney is here. That’s how Warren County has at least one doctor on duty, every day. Numbers from the Public School Forum of North Carolina’s 2017 Roadmap of Need backs this up.

There are dozens of free health clinics across North Carolina, but there is no longer one in Warren County. In this primary care desert, Aniekwensi is working to improve health conditions for the more than 10,000 patients who frequent the three Beckford clinics.

Aniekwensi says 70 percent of his patients are adults and most of them suffer from hypertension or diabetes, including Calvin Elps, who visited on a recent day for a checkup. Elps had his foot amputated a few days ago after suffering complications with diabetes.

Aniekwensi asked the 48-year-old patient if he’s had any problems or fever since he left the hospital.

“How about your home health nurses, have they been coming to check on your wound?” Aniekwensi asked.

After the patient visit, Aniekwensi said to be a doctor in Warren County, you have to really want to be here.

"Absolutely, absolutely,” Aniekwensi said. “You have to have that spirit of service. And you have to want to serve the people, just to be able to serve.” 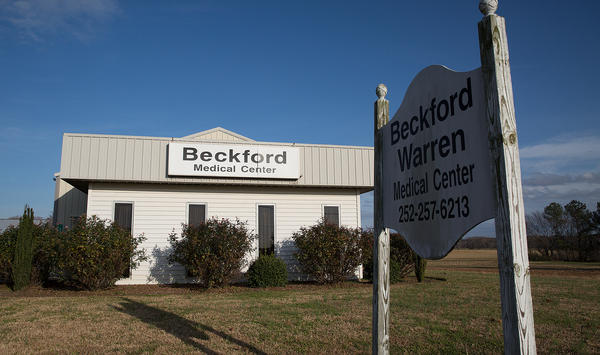 Learning to Be The 'Only Doctor In Town'

Aniekwensi has a big laugh, and a big heart. The 47-year-old was born and raised in the West African country of Nigeria. And that’s where he graduated from medical school. Before his residency at New York Medical College, Aniekwensi worked in Lesotho, a small, rural, mountainous country in southern Africa.

“That is where I got a lot of my experience because you are the only doctor in town,” Aniekwensi said. “We did everything from C-sections, atopic pregnancies, to all the surgeries, so that honed my experience. And that also built up my interest of what a doctor should be.”

Aniekwensi said he was sad to see the Warren Community Health Clinic close its doors last year, due to lack of funding. He would sometimes spend his lunch break there, volunteering.

Aniekwensi says when patients at Beckford Medical Center were between jobs and insurance, they could get free help at the Warren Community Health Clinic. Now many of those patients are back in his office, whether they can pay or not.

“People have various payment plans,” Aniekwensi said of patients who pay over time. “And we don’t turn away any patients.”

Aniekwensi will see about 10 more patients before the day is over. A slow day. His days in Henderson, in nearby Vance County are much busier.

NOTE: This report was produced as a project for the Dennis A. Hunt Fund for Health Journalism, a program of the USC Annenberg Center for Health Journalism. If you know of a former patient of the Warren Community Health Clinic in Warrenton, email Race and Southern Culture Reporter Leoneda Inge at linge@wunc.org.

What Happens After a Rural NC Health Clinic Closes?

The former Warren Community Health Clinic in Warrenton sits empty and quiet, across the parking lot from the county health department. Until last year, the clinic served low-income patients who often were unable to pay for medical services and didn’t have Medicare or Medicaid.

Open enrollment for health insurance under the Affordable Care Act begins today amid continued uncertainty over the fate of the health care law.  Here in Western North Carolina, the recent split between Blue Cross and Mission Health adds another layer of confusion and stress for consumers.

There is now a disincentive for health insurance navigators to set up shop in rural areas. Navigators are those specially trained people that help consumers sign up for health insurance on the marketplace. The Trump administration has tied their funding to how many people they sign up for coverage on the marketplace. Since chances are higher of signing up more people in urban areas, navigators in South Carolina are focusing on cities at the expense of rural areas.

President Trump’s decision to stop paying subsidies to insurance companies means many middle class families will likely pay more for coverage. As part of the Affordable Care Act, insurers got those payments to help make health insurance affordable for customers.