What's It Like To Ride Out A Hurricane On A Tower In The Middle Of The Ocean?

Hurricane Matthew continues to roar up the eastern seaboard. It will come closest to North Carolina sometime overnight Saturday and into Sunday.

One North Carolinian will be closer to the storm than anyone else, and he’s doing it by choice. Richard Neal owns the Frying Pan Tower, a former Coast Guard Light Station 34 miles south of Wilmington, surrounded only by the open ocean. Neal bought the tower from the government in a 2010 auction and has converted it into a bed and breakfast.

WUNC’s Dave DeWitt spoke with Richard Neal about his unique tower and what it's like to watch a storm from the middle of the ocean:

How’s the weather out there right now?

"Actually the wind is blowing pretty constant. Waves are coming out of the east. It’s starting to pick up a little bit, but there’s still a little bit of daylight even though it’s getting a little overcast."

Give us a better sense of where the Frying Pan Tower is, in relation to the mainland.

"If you look at the coast of North Carolina, you’ll see a couple of bumps out there – one of them being Bald Head Island. If you just go to the southeast of there, about 34 miles - as they would say a ‘fir piece’ - you will actually see a strange little oil derrick facility sitting there in the middle of the ocean, out of sight of land." 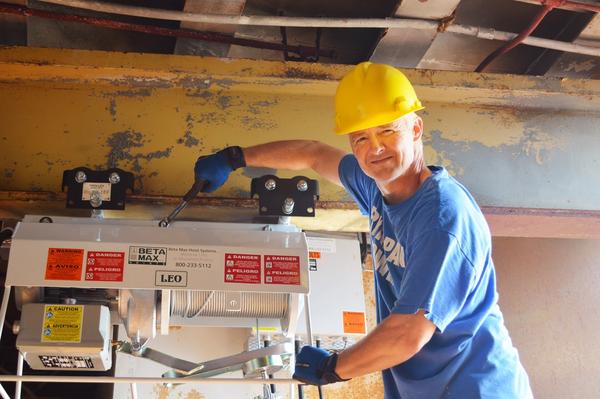 Describe the structure itself.

"The actual physical structure has four legs that are buried several hundred feet into the bedrock and was built in the nature of an oil derrick, from the Gulf Coast area. They massively overbuilt these things, with a lifespan of 50 years. That was very conservative because we are at 55 years already. They are solid. They will twist and flex a little bit – not enough to spill your soup but enough to let you know that the winds are approaching 100 miles per hour."

You’ve ridden out storms at the tower before. Describe what it’s like from beginning to end to be surrounded by nothing but water when a storm comes through.

"Surprisingly enough, when you are out here and even though all you see is water, the facility itself gives you a tremendous sense of security. It’s large enough that you don’t feel trapped or constrained. And the waves, the larger they get, the more they look like mountains rolling past. They don’t actually hit you like you would expect on a surf because the legs are very thin so they slide past. Just seeing these enormous lumps of water rolling past at what looks 20 knots or 25 miles per hour is just an amazing experience.

The colors and the aqua and the air that gets mixed into the water; it’s the most bizarre and beautiful thing you’ve ever seen. So you really don’t have time to get scared about it, because the facility – even though its moving just a little – it is giving you no other indication other than it was designed for this, it can flex. That’s the key to being in the ocean, it needs to flex and give way, rather than trying to stand rigid, like a seawall, for example."

What draws you to be out there in a storm like this?

"The folks on shore will have surges, they will have winds, they will probably have electrical issues, depending on where they are. Out here, we are used to being completely off the grid. So if we need electricity we fire up the generator or we use a little solar, or today we could be using wind power. It’s almost like an adventure, but with the safety factor of - we talk daily to the Coast Guard. We wouldn’t call them for help - don’t get me wrong on that, we chose to be here - but we are here to help, if someone needed it.

It’s just a unique location, very strangely placed, back in the 1960s, but designed to last probably a century, at least. A wonderful place to be.... beautiful views."

Richard Neal plans to broadcast some live updates on Facebook as Hurricane Matthew approaches the tower. He also has several live webcams at the Frying Pan Tower at explore.org.

The eye of Hurricane Matthew is just off the coast of Georgia, pushing surge flooding into Florida and Georgia, according to the National Hurricane Center. The storm's highest sustained winds are 105 mph. The storm is expected to move near or over the coast of South Carolina Saturday.

Haiti's interior minister says the death toll in his country from Hurricane Matthew has jumped significantly to more than 280.

Officials and aid workers are finally being able to get in to parts of the country that were slammed by Matthew on Tuesday. It made landfall in Haiti as a Category 4 storm and was the most powerful to hit the Caribbean nation in more than 50 years.

In Haiti hundreds of thousands of people affected by Hurricane Matthew are still waiting for aid.

The death toll is in the hundreds and is expected to rise. The Haitian president calls the situation in the southwest a catastrophe.

At the Lycee Philip Garrier, a high school in the hard-hit town of Les Cayes that's serving as a shelter, there's growing frustration among people who lost everything to the storm.

Hundreds of people took shelter in the school, sleeping on classroom floors. Most say they now have nowhere else to go.