What We Know About Brentley Vinson, Officer In Charlotte Shooting

The Charlotte police officer who fatally shot Keith Lamont Scott last week has a short personal history with CMPD but a long family one. WFAE's Michael Tomsic has been researching officer Brentley Vinson, who, like Scott, is African-American. He joined Mark Rumsey to discuss what we know.

Vinson has only been with CMPD about two years. He turned 26 years old this month. And he has no disciplinary history with CMPD, according to their records.

What do we know about his family history with CMPD?

His father, Alex Vinson, was with CMPD for 26 years. He investigated homicides, robberies and other crimes, eventually becoming a sergeant, according to his LinkedIn profile. He retired in 2006. In the past few years, he started his own private investigative company that specializes in criminal defense.

How long did the father's career overlap with current CMPD Chief Kerr Putney?

About 14 years. There was a four-year period when both Alex Vinson and Putney were sergeants, and then Putney was promoted to captain and kept working his way up.

It's unclear what kind of relationship they had, if any. Alex Vinson declined our interview request, and CMPD hasn't answered our questions about their relationship.

What else do we know about Brentley Vinson? 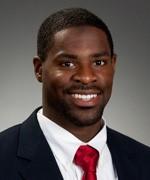 He has no criminal record, according to the Mecklenburg County clerk of court. A search of national records turned up one traffic violation that was dismissed.

He grew up in Charlotte and was a standout football player at Ardrey Kell High School before tearing his ACL. After recovering, he played one season with Fork Union Military Academy before going to Liberty University. It's a Christian school in Lynchburg, Virginia. He was a three-year starter at defensive back.

What do people who know him say about him?

His coaches and a friend also declined or did not respond to our interview requests. His Liberty football profile mentions his leadership. In a Lynchburg newspaper story from his senior year, a coach describes him as exactly the kind of player you want. And a teammate said:

"He’s been a huge role model for me on and off the field. Most importantly, he keeps me on the right path. He keeps everybody in check that way."

He's on paid administrative leave, which is standard after an officer-involved shooting.

Art Emerges In Uptown As City Tries To Heal

The sounds of a typical weekday in Charlotte’s Uptown have returned. Though there is still a sense of unease and restlessness in the city after the shooting death of Keith Scott and as protests continue.

But in the wake of this emotionally raw time for Charlotte, art has emerged in the center city. WFAE’s Sarah Delia took a walk around Uptown to hear from artists who are trying to help heal Charlotte through their work.

Charlotte Mecklenburg Police have released some of the body and dash cam video of the police shooting of Keith Scott. They had the discretion to do that. But come Saturday, that will no longer be their call to make. A new law will require a court order to release that type of video. State Representative Allen McNeill, a Republican from Asheboro, is the primary sponsor of the law.

The bill has been the target of renewed criticism as calls intensified for CMPD to release video of the Scott shooting, but McNeill says critics are misinformed.

One week ago on September 20, CMPD officer Brentley Vinson shot and killed Keith Lamont Scott. WFAE’s David Boraks and Tom Bullock join All Things Considered host Mark Rumsey to talk us through what we know and still don’t know about the case.

Listen
Listening...
/
Residents call for resignations of the mayor, city council members and the Chief of Police over fatal police shooting of an African-American man at a public hearing.

Thunderstorms doused demonstrations uptown Monday night but many residents upset over the fatal shooting of Keith Lamont Scott last week by a CMPD officer dressed down city officials at last night’s City Council meeting. They called for the resignations of the mayor, council members and chief of police.

After Protests, Charlotte Takes A Breather With A Panthers Game

City officials declared Sunday’s Panthers-Vikings football game an "extraordinary event." That meant lots of police downtown and extra security measures. There was a small protest, but most people welcomed the distraction after a week of unrest.