A judge could rule Thursday whether to release CMPD video of an officer-involved shooting in June. That case was filed by WFAE last week. It's the first petition of its kind in Mecklenburg County since a new state law went into effect October 1. The law requires a court order to release body and dash cam video.

Earlier this week, WFAE's Lisa Worf laid out the process to request the video. She picks up the story with her day in court this past Tuesday:

We're back at the courthouse, just sitting outside the courtroom waiting for the hearing and working on our arguments. I'm joined by WFAE News Director Greg Collard.

We've decided to argue this case on our own, but I have hit up a few lawyers for advice. They tell me stay general, argue for a compelling public interest, and make the point this incident happened several months ago. They also say don't sound too lawyerly.

I wondered if anyone would oppose it, and soon get the answer. CMPD Attorney Mark Newbold and the head of the district attorney's homicide team Bill Stetzer greet us.

It looks like we'll have some opposition. Outside the courtroom is an officer we think might be involved in the shooting. There appears to be an attorney with him.

"How are you feeling, Lisa?" asks Greg.

"We do feel a little outgunned here," admits Greg.

We all take our seats. There are two of us and five lawyers seated on the other side, including two representing the officers in the video. Superior Court Judge Eric Levinson comes in without a robe, asks us not to stand, and gets started.

"So ma'am I think this is your petition," says Judge Levinson. "I think I'll turn to you first, hear from you, and then I'll just sort-of turn to these other folks and see what their comments are and we'll go from there." 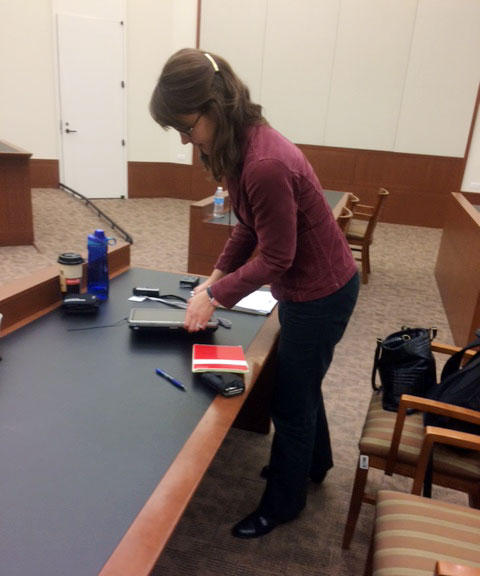 My argument is short. I talk about intense public interest in police shootings and how it's shaping the public discourse.

"Body and dash cam video certainly doesn't tell the whole story, but it provides an irreplaceable perspective of how those events occurred," I tell the court. "This is an incident that took place more than five months ago. The facts of the investigation have been well-digested. The police officers are now back on the street. If anytime is good for release, it's now."

The video we're asking the court to release involves a man who shot someone in the foot on a CATS bus in June.  According to a CMPD press release, Officers Michael Bell and Garret Tryon saw a man fitting the description of the shooter walking beside N. Tryon. They got out of their cars, and saw he had a handgun. CMPD says Rodney Rodriguez Smith fired at least one shot and the officers fired multiple shots.  Smith died shortly afterward. CMPD said he and the shooting victim on the bus knew each other.

CMPD attorney Mark Newbold tells the judge although Chief Kerr Putney has called the officers' actions heroic, the department is still waiting on the DA to weigh in.

"At this point I think it's very important that the DA be heard and also the officers be heard," says Newbold.

Assistant District Attorney Bill Stezter is not in favor of releasing the videos. He refers to them as "evidence" in an ongoing investigation.

"This case is in the process of being reviewed, and until such a decision is made on charging, we'd consider this like we consider any other open, active investigation and we would not be able to acquiesce to the release of evidence in such a case," argues Stezter.

Then, the attorneys representing the police officers speak, including George Laughrun. He was a defense attorney in the trial of former officer Randall Kerrick.

"The petitioner has not shown any public interest, except a generalized statement saying the public has a thirst, if you will, to see the body cam and dash cam videos," argues Laughrun. "They have not shown you any public interest. There's not being any protests. There's not been any marches on city hall. No one's been showing up at city council demanding the chief to do a, b, c, and d,"

Furthermore, he argues, if the DA decided to press charges, the video could mean a potential grand jury pool would see evidence that might not even come out in the actual trial. And he warns of a "slippery slope" where defense attorneys file these petitions, arguing public interest to get access to district attorney information they're not entitled to.

"I would tantamount that to a fishing expedition," says Laughrun.

Attorney Jeremy Smith then speaks. He represents Officer Garret Tryon who is also in the courtroom.

"It is interesting this is a radio station that wants the video. I have a feeling it would go up on their website which would drive internet-based clicks or revenue or viewers from that particular screen," says Smith.

Then, he brings up one of eight standards the statute says a judge should consider.  That's whether the video would reveal information of a highly sensitive, personal nature.

"Madame, did you want to respond to anything that's been suggested or argued here or add anything?" asks Judge Levinson.

I say a compelling public interest shouldn't be gauged by the number of people protesting in the street, though there's been that here. It's an interest in the transparency of the justice system. And I pointed out we picked this case specifically.

"As for the ongoing criminal investigation, the DA hasn't come to a conclusion, but CMPD has determined these officers are fit for duty and they're back on the street," I argued.

The judge asked whether the family of the deceased had seen the video. They hadn't. He asked if we knew of any civil process going forward around the case. We didn't know.

The judge said he'd make a decision by today. He said any order to release the video would include a 24 hour wait. After all, someone may appeal the decision.

Businesses around Charlotte saw sales drop during last week's protests over the shooting death of Keith Scott. But now that a curfew has been lifted and the weekend is approaching, they're hoping for a rebound.

Violence during the first night of protests uptown last Wednesday left some hotels, stores and restaurants, including those around the EpiCentre, with broken windows and other physical damage.

But the week of protests also scared away customers, causing financial damage that most are still recovering from.

A Queen City Mayor Reflects On Riots / Are Police Reforms Panning Out?

An African-American man is shot and killed by police. Days of protests and riots follow. Police don riot gear and fire tear gas. Calls for Queen City officials to resign follow. But that queen city was Cincinnati and the year was 2001. We hear from Cincinnati’s mayor at the time about their experience to see what we can learn here. Then, how police reforms around the country are panning out.

What We Know About Brentley Vinson, Officer In Charlotte Shooting

The Charlotte police officer who fatally shot Keith Lamont Scott last week has a short personal history with CMPD but a long family one. WFAE's Michael Tomsic has been researching officer Brentley Vinson, who, like Scott, is African-American. He joined Mark Rumsey to discuss what we know.