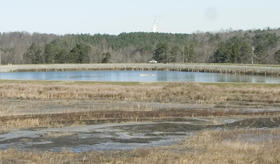 Beginning in February, 2013, Duke Energy hired two University of North Carolina at Charlotte professors to do scientific study of the company's coal ash management options. In October, 2014 Duke named one of those experts, Dr. John Daniels, to chair a newly-formed National Ash Management Advisory Board managed by UNCC.

Documents obtained by Charlotte television station WBTV show that a report issued by the other professor, Dr. Bill Langley, and billed by Duke Energy as “independent,” was in fact directly influenced by Duke Energy. According to a WBTV news story that aired on Monday, documents show that the final report from Langley included changes that a Duke official had provided as “highly suggested edits."

Duke Energy has removed about 13 million tons of coal ash at five plants in North Carolina as it complies with federal and state cleanup requirements. But ten times that amount remains in the ground across the state, and not all that will be removed.

What if a dam holding back coal ash burst at one of Duke Energy's coal plants in the Carolinas or Midwest? Newly released maps from Duke show many properties would be inundated, including some homes and docks. The maps are now public, after environmentalists threatened to sue.

A Visit To One Of NC's Largest Solar Farms

On a country road south of Monroe in Union County, near a golf course and soybean fields, is a new kind of farm - a solar farm.  This spring, Duke Energy began generating electricity from 684,000 solar panels here, the largest solar farm in the Charlotte region and one of the largest in the state.

A North Carolina environmental group is asking the NC Supreme Court to decide whether it's legal for it to install solar panels on a church rooftop, then sell electricity to the church.  NC WARN is appealing a 2-1 ruling against it last month by the NC Court of Appeals.