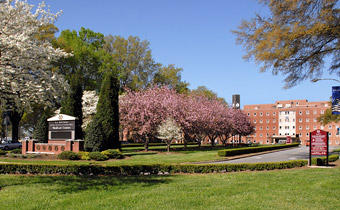 The independent watchdog within the Department of Veterans Affairs reports the Salisbury VA manipulated wait times and amassed a huge backlog of radiology exams.

In 2014, some supervisors had staff at the Salisbury VA routinely "fix" patient appointments to make waits seem shorter. The VA Office of Inspector General reports more than half the schedulers it interviewed were doing it. It's unclear how long that had gone on.

Kaye Green became Medical Director of the Salisbury VA in late 2012. She says she's never told anyone to fudge a number. And here's what she says about the supervisory staff mentioned in the report:

"Those staff are either no longer working here or they are no longer supervisors," she said.

Green says some employees were also stripped of their ability to schedule until they were retrained. She wouldn't say how many people were fired.

The VA has a goal of seeing patients within 14 days. Green can't say how long waits actually were in 2014.

The VA's watchdog office also reported this week that Salisbury had a backlog of more than 3,000 radiology exams in 2014. Those X-ray or other imaging orders are supposed to be completed within a month. But in one case, it took at least two years.

The inspectors reviewed records for 15 patients who died before their exams were completed. Green emphasizes, "They were able to definitely determine that none of the delays waiting for an imaging study in any way caused or contributed to those deaths."

Green says the same is true for the manipulation of wait times: there's no evidence patients were harmed.

Salisbury VA Chief of Staff Subbarao Pemmaraju puts it this way: "Did we have issues? Absolutely. When we found out about it, we worked hard at it. We fixed the system in a sustainable fashion, so it stays fixed."

The Office of the Inspector General says the Salisbury VA has provided an appropriate plan for the backlog. That includes recent additions of staff and imaging services at large new facilities in Charlotte and Kernersville. Green says the backlog is now down to about 300 exams.

She says they also have a new audit tool to ensure wait times are accurate. She says that tool actually helped the inspectors with their findings. Average wait times for care are currently between five and 14 days.