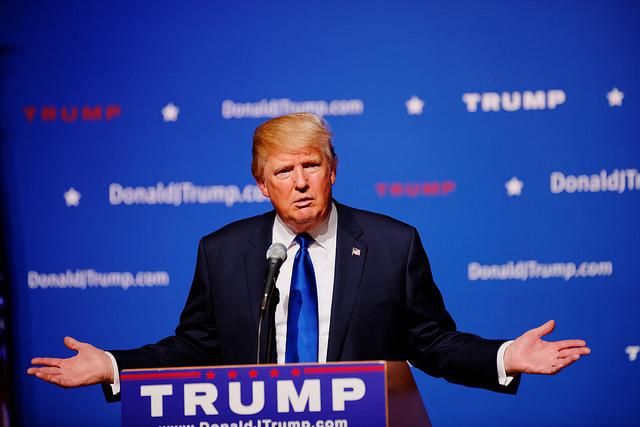 Donald Trump held another rally in Greensboro Friday afternoon. The embattled Republican candidate for president wasted no time blasting his opponent, Hillary Clinton, ahead of the last presidential debate next week.

As Trump spoke in Greensboro, another woman accusing him of unwanted sexual advances held a press conference in California.

Trump spent more than fourteen minutes of his speech refuting claims that he groped or sexually assaulted women.

According to recent polls, Trump’s support has fallen off in the state in the past week, as it has in the rest of the country.

Multiple media outlets have reported that his campaign has closed its field operations in Virginia and moved more people into North Carolina for the stretch before Election Day.

For the first time, President Trump publicly addressed allegations against Alabama Republican Senate candidate Roy Moore on Tuesday. The president defended Moore, who is accused of making unwanted sexual advances toward teenage girls as young as 14 when he was in his 30s.

"Let me just tell you, Roy Moore denies it," Trump said. "That's all I can say. He denies it. And by the way, he totally denies it."

Trump Accuser Says She 'Jumped Out' Of Her Skin During Debate

When Jessica Leeds was a traveling paper saleswoman in the late 1970s and early 1980s, she told herself that sexual harassment was just a fact of life.

"You didn't complain about that sort of thing," she told NPR in an interview Friday, which will air on All Things Considered.

Feeling Burned By The Media, Trump Turns Up The Heat

The whirling dervish that is Donald J. Trump spun ever faster on Thursday, shredding almost everything in his range of vision — Hillary Clinton, his fellow Republicans who fail to support him unequivocally, the growing chorus of women accusing him of sexual misconduct, and especially the press.

With women's status a key issue in the presidential race, celebrity women from the entertainment and sports worlds aren't shying from the political spotlight. Some are big donors to campaigns and PACs. And some like to hit the campaign trail, as Olympic figure skater Michelle Kwan is doing for Hillary Clinton in North Carolina this week.