ShareTweetEmail
Listen
Listening...
/
Naomi Prioleau reports on how Guilford County Sheriff's officers are training church officials in the region to respond to an active shooter.

Gunshots rang out at Calvary Baptist Church in Mcleansville, but no one ran or screamed. The unsettling sound was part of a training scenario video Guilford County Sheriff’s officials played during a recent church safety workshop.

It was one of four organized around the county in the wake of the recent church shooting in Sutherland Springs, Texas.

“Our goal is to make sure that the people in church are safe,” Sheriff BJ Barnes said.

In a room filled with approximately 70 people, mostly men, Guilford County officers gave tips, advice and answered questions about what to do if a mass shooting were to occur inside a church.

The first bit of advice was to create a security team. A security team acts as the “eyes and ears” of the church. Deputy Tracy Chandler said that for some churches, the definition of the team may vary.

“We’ve been to many churches that have a certain protocol that they handle and we’ve been to a large church that works totally different,” she said. “It doesn’t matter. What works for you is what we’re geared towards and what we want to help you work on.” 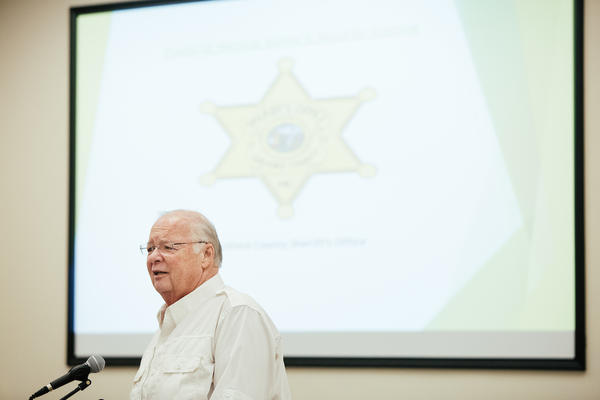 At Calvary Baptist Church, there’s only one service each week, but it brings in a big crowd –  around 275 people on Sundays.

The church has classrooms, a sanctuary, an auditorium and an area for children. Associate Pastor Matt Lawrence said the church is already taking necessary precautions to keep congregants safe.

“We lock all the doors except the front doors, so we have one person out there all the time in the foyer area who’s keeping an eye on things out there,” he said.

Lawrence’s 12-person security team met with the Guilford County Sheriff’s Office more than a year ago for private training.

He said having a security team may not be for every church, but it works for Calvary.

“I think it’s a good idea to make some steps so you’re at least doing what you can,” he said. “Not every church has unlimited money to do things that might make it less likely, but every church can do some things.” 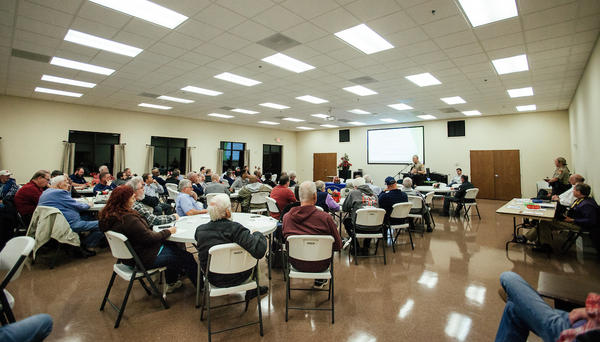 If a shooter was to come on to the premises, Deputy Dan Harris gave three tips. First: run away from the danger, and definitely not into the arms of law enforcement.

“I know you are probably so glad to see somebody in a uniform coming in there,” he said. “I know you are, but I don’t know. So just do what we ask you to do and everything will be fine.”

Harris’ second tip was to find a solid space or solid furniture to hide behind.

“When I say hide, don’t jump down behind some bushes,” he said. That’s concealment. Bullets eat bushes, trust me.”

A recent study by the Federal Bureau of Investigation found that 13 percent of mass shootings ended when unarmed citizens restrained the shooter.

It’s one of the reasons why Harris is an advocate of the third tip: fighting.

“John 15:13, ‘Greater love hath no man than this, that someone would lay down his life for his friend,’” he said. “That means a lot to me. I’m going to stand up and fight. I’m not going down without a fight. I promise you that.” 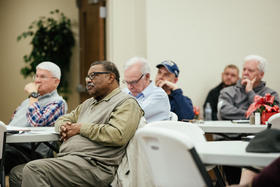 During a question and answer session, some people wanted to know if members should bring concealed weapons to church. In North Carolina, qualified residents may obtain a permit to carry a concealed handgun from their local sheriff's office. The permit is valid for five years.

Guilford County Sheriff’s Office Attorney Rick Stevens said ultimately, the decision is up to the church.

“I can’t say that I think that’s a great decision or not, but I do understand your concern and that may be a solution to that problem,” he said. “Unfortunately like you said if folks are legally carrying concealed, you may not have control over their actions.”

He did say that if they’ve followed the conceal-carry curriculum and a shooting does happen in a church, people using guns to apprehend the shooter should know to identify and cease using their guns when officers arrive at the scene.

“It’s a shame that our country’s changed or whatever you want to say, to the point that we have to worry about this, but we are a soft target in some sense because we are welcoming,” he said. We do want people to come in.”

Wednesday afternoon, the North Carolina House is scheduled to debate a bill which would, in part, nearly end the need for concealed-carry permits for handguns. Ahead of that debate a group supporting the measure saw fit to publicly release the names, phone numbers and other information of four individuals trying to stop the gun bill.