Tree Cutting Is Underway For The Atlantic Coast Pipeline, But Opposition In NC Is Staunch

Listen
Listening...
/
Rusty Jacobs reports on support and opposition for the Atlantic Coast Pipeline, of which 200 miles will cut through the Tar Heel State.

Crews are already cutting trees in Northampton and Robeson counties to make way for the Atlantic Coast Pipeline, the 600-mile-long delivery system that will carry natural gas from West Virginia, across Virginia, and through North Carolina. The pipeline will cut an eight-county, 200-mile-long path across the Tar Heel State with supporters and opponents all along the route.

Mavis Exum Edmundson, 71, and her sister, Barbara Exum, 65, grew up on their family’s Wilson County farm in eastern North Carolina, amid fields of tobacco, corn, cotton and fruit trees.

“I’m country through and through. This is the happiest place I’ve ever known,” Edmundson said. 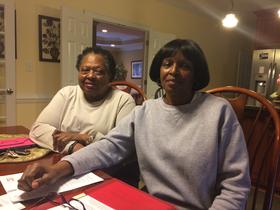 The Exum sisters have since moved back to the family homestead in Kenly, N.C., living next door to one another in two houses along a road that bears the family name.

“And that was always daddy’s dream, my father’s dream, to have all of us come back here after we got out of college and build houses,” said Edmundson.

Barbara Exum moved back to Wilson County in 2008, after a 30-year career working for the federal government and living in Maryland.

“What’s left of our farm is about 30 acres,” Exum said. “It was substantially larger than that until around the early 70s, when my father started selling lots so that other people in our community could build homes.”

‘And I Get No Compensation Whatsoever’

The Exums' father, Levell Exum Sr., had a grand vision for his Wilson County farmland: he split up the property into smaller tracts to sell to other African-Americans who wanted to own homes.

One of the first people to purchase a home from Barbara Exum’s father was Alice Freeman, who has lived in that house for more than 40 years.

“It’s a piece of property that hopefully my husband and I will be able to pass on to our children so that they might be able to have the financial benefit from it as well,” Freeman said. 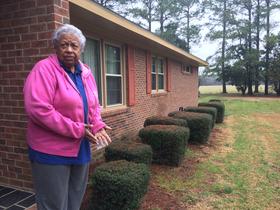 Freeman’s concerned that the advent of the pipeline might endanger that investment by driving down the value of her property—the pipeline’s path runs just 150 feet or so from her house.

Because the ACP is only passing near her house but not across her actual property, Freeman did not qualify for any reimbursement from the project developers.

“But to think that they would just totally discount me, it’s very disturbing,” Freeman added.

Eminent Domain Is A ‘Last Resort’

The Exum Family, however, owns one of the roughly 1,000 North Carolina properties from which the pipeline developers must acquire an easement.

“You just see a lot of landowners being squeezed out of their property for the benefit of big business,” Barbara Exum said.

The Exums initially were offered $1,000 by the ACP’s developers to secure the 50-foot right-of-way needed to construct the pipeline.

“None of us have signed, and we don’t intend to sign, you know we’re going to keep fighting this,” Exum added.

According to ACP Spokesman Aaron Ruby, the pipeline developers have secured 80 percent of the easements needed in North Carolina – the remaining 20 percent, like the Exum property, will have to be acquired through eminent domain, unless the developers can reach agreements with the holdout property owners.

Ruby said turning to the courts is a last resort.

“The reality is that without this legal tool, we wouldn’t have any of the public infrastructure that we all depend on and use every single day,” he said.

In eminent domain proceedings, courts first provide project developers with access to disputed land so they can begin construction while the court determines what the landowner should be paid.

Virginia-based Dominion Energy will build and operate the ACP and has a 48-percent stake in the project; Duke Energy owns 47 percent of the pipeline and Southern Company Gas owns 5 percent.

Like the Exum sisters, Francine Stephenson, 73, grew up on her father’s Johnston County farm.

“And when I was young, before this highway was paved, it was a dirt, it was clay, and I rode a mule up and down, her name was Red,” Stephenson recalled with a laugh. 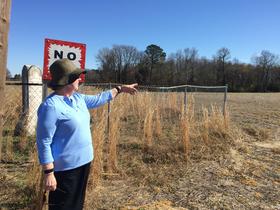 She, too, has rejected the offer from the ACP developers.

“There’s no amount of money really that can take the place of my never being able give my daughters a chance to build a house here,” Stephenson said.

Both Francine Stephenson and the Exums were active in the No Pipeline efforts in their counties—groups of people opposed to the ACP for personal and environmental reasons.

Environmental advocates say the pipeline poses risks to drinking water because of possible leaks and that compressor stations emit pollutants like the carcinogen benzene and nitrogen oxide, a greenhouse gas.

Opponents also say the state should be investing in renewable energy production like solar and wind, not perpetuating an over-reliance on fossil fuel.

“[The ACP] would cross four major rivers and six public drinking source watersheds and it would impact nearly 2,000 acres of prime farmland, requiring either purchase or condemnation of a permanent right-of-way from the landowners who are in its path,” said Gudrun Thompson, senior attorney with Southern Environmental Law Center.

A coalition of advocacy groups including the environmental law center is challenging a federal permit for the ACP in court, arguing the Federal Energy Regulatory Commission failed to prove the pipeline was necessary.

“They’re operating at full capacity,” Ruby said, in a telephone interview. “They don’t have the additional lane space, if you will, in those pipelines to bring in additional supplies of gas to fuel the growth of manufacturing and other new industries.”

Not all property owners or eastern North Carolina residents oppose the pipeline.

Matt Glover, whose family has settled with the ACP developers on a purchase price for easements across their property, has lived in Northampton County all his life, married a Northampton County girl and raised two daughters in this rural area. 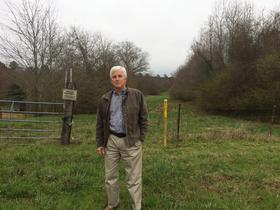 “These easements aren’t very intrusive,” Glover said. “Once the pipeline is in the ground you can resume normal activities, you can’t build a home on top of it but you can certainly build a home near it with no ill effects,” he continued.

And Glover should know. His family’s property has an existing natural-gas distribution pipeline running across it—carrying natural gas from the Transco transmission line in the western Piedmont.

“This gives us a lot more comfort that maybe some people don’t have, the fact this has been here so long without any incidents,” Glover said.

Glover and his family own a construction company that is contracted to excavate and prepare the site for an ACP compressor station in Northampton County.

Aaron Ruby, the ACP spokesman, said once construction is complete, the pipeline, buried under three to five feet of soil, will hardly be noticeable to property owners.

“Because of the depth that we bury it, farmers can continue growing crops on the right of way, they can pasture livestock, transport equipment,” Ruby said.

And the developers will pay for disruptions caused by the construction phase.

“So if they’re unable to grow crops on the right-of-way during the two-year construction phase, we’re going to compensate them for that loss of revenue,” Ruby said.

Ruby said the pipeline will provide environmental as well as economic benefits.

“Natural gas produces half the carbon emissions of coal, it produces 80 to 90 percent fewer air emissions,” he said.

Ruby said the pipeline is  being built with the “best in class standards” for safety and environmental protection.

“We have multiple overlapping layers of protection in place,” he said, pointing out the pipeline would be constructed of almost one-inch-thick steel pipe covered with an epoxy coating.

“Both of those materials provide an inherent defense against corrosion and other external damage,” Ruby asserted.

‘You Either Grow Or You Die’

For Linwood Parker, the ACP means economic opportunity. Parker is a lifelong resident and the mayor of Four Oaks, a small Johnston County town about 40 minutes south of Raleigh.

He has held public office for 30 years – and has seen his town grow almost three-fold to a current population of around 2,500.

“Well, you got to grow, you either grow or you die,” he said while giving a driving tour of his town. 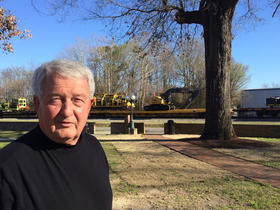 One of the stops on Parker’s impromptu tour was the Four Oaks Business Park, just off I-95. It’s the centerpiece of his town’s economic development plan.

“We’ve got a distribution center that is 750,000 square foot, employing 400 people,” Parker pointed out, referring to the sprawling facility owned by Becton Dickinson, a medical technology company.

But Parker has his eyes on a bigger prize.

And to get manufacturing, Parker said you need access to natural gas.

The ACP would not run natural gas directly to industrial, commercial or residential customers.

Local public utilities, like Piedmont Natural Gas and PSNC, would tap into the ACP with distribution pipelines and deliver ACP gas to homes and businesses in eastern North Carolina.

"The Research Triangle Park would close down tomorrow without natural gas,” Parker said. “It’s a wonderful thing, so how can it be bad for me to have it in Four Oaks?”

Full construction along parts of the pipeline’s entire 600-mile route is expected to begin this spring, though opponents still hope to keep that from happening.

Correction: An earlier version of this story incorrectly spelled the name of Four Oaks Mayor Linwood Parker. The story has been updated.

RICHMOND, Va. — Civic leaders in town after town along the 600-mile (966-kilometer) route of a proposed natural gas project have posed for similar photographs, smiling and accepting poster-sized checks from the Atlantic Coast Pipeline.

North Carolina is technically the second largest producer of solar energy in America. N.C. State University Energy Economist Harrison Fell explained the state is capable of running seven percent of the energy grid on solar. But, of course, it's not always sunny.

Duke Energy says the 600-mile Atlantic Coast Pipeline is on track to open in late 2019, even though it's still awaiting final state and federal approvals. But CEO Lynn Good said delays and more stringent conditions from regulators have pushed the project's price tag up - to between $6 billion and $6.5 billion.

North Carolina environmental regulators have issued a key water permit for the Atlantic Coast Pipeline. It's one of the last permits needed before construction begins in the state.

Duke Energy and Dominion Energy have filed court documents to acquire land via eminent domain for construction of the Atlantic Coast Pipeline.