Republican Sen. Thom Tillis spoke candidly before the National Immigration Forum on Thursday, touting his proposal to offer a potential 15-year path to citizenship to so-called "Dreamers," all while shrugging off criticism of the bill from conservative hard-liners.

"This will probably drive my press guy crazy," Tillis said, "But ... when I die, I'm going to be cremated. On my cremation urn or a little plaque next to it, I want to have two or three things -- husband, father, grandfather, RINO." 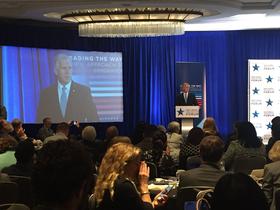 The remark drew laughter and applause from the audience. "RINO" is a term used in some conservative circles to deride moderate Republican lawmakers who supposedly are "Republican In Name Only."

"To the far-right people who call me a RINO for supporting this bill, I say I am a RINO," Tillis went on to say, "But I've got a different definition of what a RINO is -- I'm a Republican In Need of Outcomes."

Tillis' legislation, nicknamed the SUCCEED Act, has been billed as a conservative alternative to the Deferred Action for Childhood Arrivals - or DACA - program, which the Trump administration has said it will end.

The SUCCEED Act has echoes of the DACA program, but with a moderate bent. It would offer a potential 15-year path to citizenship to immigrants who arrived in the U.S. illegally prior to June 15, 2012 and were 16 years old or younger. In order to be eligible, immigrants would also need to obtain a high school diploma and pass a criminal background check.

If those preliminary requirements are met, immigrants would receive conditional immigration status for five years, during which they would be required to earn a higher-education degree, serve in the military, or remain employed. Eventually, they could apply for permanent residency, then citizenship.

The bill would not allow "Dreamers" to sponsor family members to the U.S.

Tillis and Republican Rep. James Lankford of Oklahoma were the chief writers of the legislation.

"I think it's a good starting point," Tillis told the audience Thursday, "It's not easy, what we've put forth, but I think it's reasonable, and I think it's something that will gain the confidence of members of Congress and the American people so that we can move on to the other matters that we need to move immediately to."

Mountain Latinos High Spirited As They Fight Back Against DACA Decision

Progressive groups in Western North Carolina are pushing back against the Trump administration’s decision to end the DACA program in six months. BPR’s Davin Eldridge has more…

Well over a hundred demonstrators, mostly students, turned out to protest the administration’s decision at Western Carolina University. They made their objections heard next to the college’s so-called Fountain of Wisdom, in the center of campus. The crowds chanted "si se puede".

A few hundred people gathered in uptown Charlotte on Tuesday to express their anger and fear over the President’s decision to end DACA. They included DACA recipients and those who want to protect the legal status of these immigrants. Here are some of their voices.

Elver Barrios: "2013 came and I got my work permit and I went to the DMV and I got my driver's license. I was so happy to have a driver's license in the state of North Carolina and to be able to drive without the fear of being deported. 2016 came and many of our dreams were shattered in November."