Several thousand people marched in downtown Durham in a demonstration against racism on Friday afternoon.

Protesters describing themselves as anti-fascist gathered on Main Street in anticipation of a possible white supremacist rally. Many chanted: "No Trump. No KKK. No Fascist USA."

Some wore black t-shirts. Others covered their faces with bandanas despite the 90-degree plus heat. One man faced off with another who said he supported the Confederacy.

Witnesses said just one or two of members of the Ku Klux Klan rode by the protest on motorcycles.

The demonstration was expected to be a face-off between supporters of a downed Confederate statue and the Ku Klux Klan, but the Klan was a no-show during the noon-time hour. The protests remained peaceful, though downtown city and county offices closed because of the growing crowd. 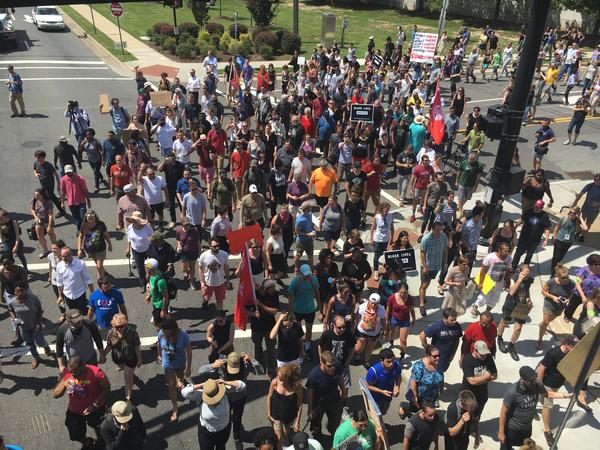 Bobby BJ Meeks stood back from the crowd and recorded a video with his smartphone.

“I think it’s kind of sad we have to resort in something like this," Meeks said. "All Lives Matter, regardless of race.”

In a statement, Durham County Sheriff Mike Andrews said his office has been gathering and reviewing information related to potential counter protests throughout the week. 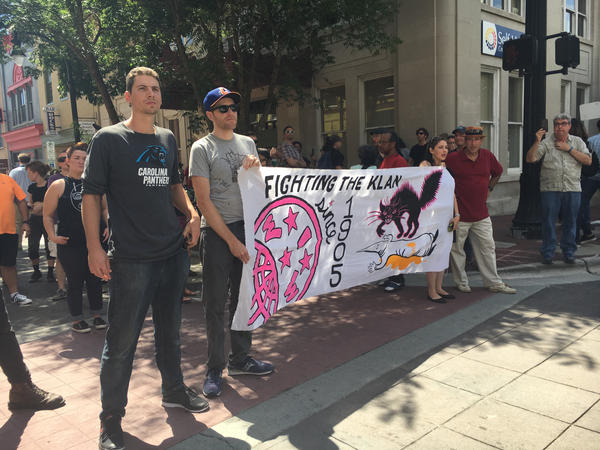 The march comes at the end of a tense week in Durham, after protesters brought down a Confederate monument on Monday. Eight of those protesters face felony charges related to the demonstration earlier in the week.

In comments posted online Tuesday night, Governor Roy Cooper called for the removal of all Confederate monuments from state property. He also called on the General Assembly to repeal a 2015 law that prevents the removal or relocation of monuments.

On Thursday, protesters marched on the Durham County courthouse in support of the demonstration that brought down a Confederate statue, while a monument to Gen. Robert E. Lee was vandalized nearby at Duke University.

Several miles away, Duke officials discovered early Thursday that the carved limestone likeness of Lee had been defaced. The statue in the entryway to Duke Chapel had scuff marks on its face and damage to its nose. Lee is one of 10 historical and religious figures depicted there, including Thomas Jefferson.

One of the last documented KKK rallies in the Triangle was on June 15, 1987. About 60 white-hooded figures marched in Durham and then progressed to Chapel Hill. Thousands of others lined the parade route: some to support the participants, others to heckle them.

This is a developing story and will be updated as more information becomes available.

Asheville police arrested four people Friday morning for attempting to vandalize a Confederate marker in Pack Square downtown.  Police say protestors gathered around the Vance Monument before 8 a.m. Friday.  Several then attempted to damage the smaller marker in front of the monument that has a plaque with the likeness of Confederate General Robert E. Lee.  Arrested were 27-year-old Nicole Townsend, 45-year-old Amy Cantrell, 30-year-old Hillary Brown, and 34-year-old Adrienne Sigmon.  All are from Asheville and all four face charges of Damage to Real Property.

A crowd of people gathered in downtown Durham late Monday to witness the toppling of a long-time Confederate monument. On Twitter, Governor Roy Cooper called the Charlottesville violence unacceptable, but also said quote – “there is a better way to remove these monuments.” Protestors on the scene in Durham said destroying the monument was their answer to the deadly attack by a white supremacist.