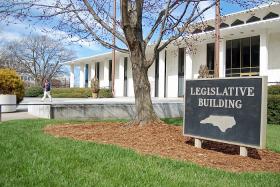 A wild day at the North Carolina General Assembly began with bipartisan support for a $200 million disaster relief bill and ended with an unscheduled special session, dozens of new bills, and an effort to remove some authority from Democratic Governor-elect Roy Cooper.

In a chaotic scene of political theater, Republicans flexed their legislative muscles and proposed a series of provisions that would remove certain powers from the Executive Branch, including the Secretary of State and Governor.

Less than an hour after lawmakers passed a Disaster Relief Act aimed at helping victims of hurricane flooding and western mountain wildfires, they reconvened for a fourth special session of 2016. That set-off Democratic lawmakers, including Representative Darren Jackson (D-Wake).

"I just wanted to take a few minutes to tell you this is why people don't trust us. This is why they hate us," said Jackson before filing a protest.

"I don't believe this session is constitutional," he said.

Three dozen of his Democratic colleagues joined him, but the session carried on. By the time legislators left for the evening more than 28 bills were filed. One proposal would eliminate the five member state board of elections, and form a new eight member board to oversee elections, ethics and lobbying. A different bill would require the Governor's cabinet leaders to receive Senate confirmation- a protocol that has not been in place for decades.  Democrats pounced, railing against the process of quickly moving legislation of significance. Republicans say they are acting within the law.

"The bottom line in that case is the constitution allows it," said House Rules Chair David Lewis (R-Harnett) in talking about a proposed requirement for the Governor's cabinet secretaries to receive Senate confirmation.

"When we were in the minority, we would complain about these things and they would do it. They are now in the minority. It is perfectly in line with things that have been done for years in this building," said Senate Pro Tempore Phil Berger (R-Rockingham) earlier in the day.

It is unclear how many of these bills will even receive debate, and whether the fourth special session of the year will conclude this week.