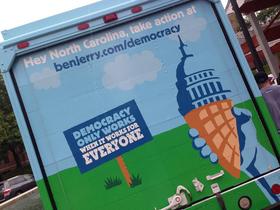 The Supreme Court will not review North Carolina’s invalidated Voter ID Law, leaving in place a ruling by the Fourth Circuit Court of Appeals that had struck down the law. A lower court ruled that some provisions in the law "target African Americans with almost surgical precision," and therefore unconstitutional.

The controversial law passed in June, 2013, required photo identification at the polls, reduced early voting hours, and eliminated same day registration as well as out-of-precinct balloting. The NAACP was the first of several groups to file suit, claiming that the law disproportionately burdened minority voters.

At first the law was upheld in a Federal District Court in Winston-Salem. Judge Thomas Schroeder ruled the law constitutional, in part because the plaintiffs had failed to adequately demonstrate the law had discriminated against black and Latino voters. On appeal, the Fourth Circuit Court of Appeals reversed Judge Schroeder's ruling and found in favor of the NAACP challenge. That was then appealed to the nation’s highest court, which on Monday announced it would not hear the case.

Former governor Pat McCrory supported the law as well as the appeal to the Supreme Court, but the situation was complicated when Democratic Gov. Roy Cooper and Attorney General Josh Stein won the 2016 election and subsequently tried to withdraw the appeal.

Importantly, the Supreme Court did not give a reason for why it declined to review the case. Chief Justice John Roberts in a statement said the political situation created uncertainty over who is authorized to seek review of the lower court ruling.

"Given the blizzard of filings over who is and who is not authorized to seek review in this Court under North Carolina law, it is important to recall our frequent admonition that '[t]he denial of a writ of certiorari imports no expression of opinion upon the merits of the case,'" Roberts wrote.

He stressed that there should not be anything read into the decision not to hear the case, leaving open the possibility that a similar case might reach the Supreme Court.

Republican lawmakers in North Carolina rebuked Cooper and Stein for actively trying to derail the voter ID laws, which they said was in itself a violation of law.

“It is unconscionable that Roy Cooper and Josh Stein – who ignored state law and flouted their conflicts of interest to kill voter ID in North Carolina – have now caused the vast majority of voters who support voter ID to be denied their day in court,” said N.C. Senate Leader Phil Berger and House Speaker Tim Moore, in a joint statement. “In light of Chief Justice Roberts’ statement that the ruling was not based on the merits of voter ID, all North Carolinians can rest assured that Republican legislators will continue fighting to protect the integrity of our elections by implementing the commonsense requirement to show a photo ID when we vote.”

The dispute is similar to the court fight over Texas' voter ID law, also struck down as racially discriminatory.

In a released statement, Gov. Cooper praised the ruling: "Today's announcement is good news for North Carolina voters. We need to be making it easier to vote, not harder – and the Court found this law sought to discriminate against African-American voters with 'surgical precision.'