The Department of Public Instruction considers about 1 in 5 North Carolina teachers chronically absent, which it defines as taking 10 or more non-consecutive sick days in a school year. State education officials say chronic absenteeism is costing schools in student test scores and pay for substitute teachers.

The State Board of Education heard a report on chronic teacher absenteeism at its December meeting. The Department’s Director of Educator Recruitment and Support Tom Tomberlin reported that more than five thousand teachers have been chronically absent for three years in a row. 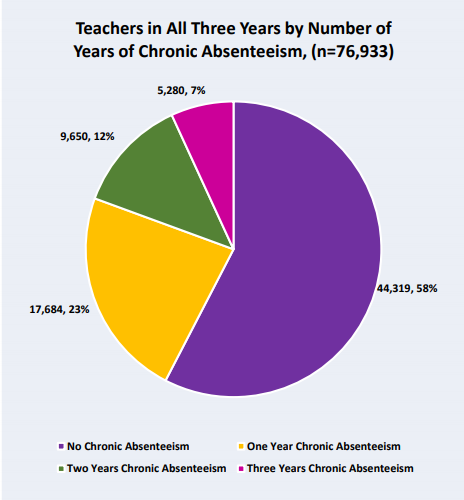 “The teaching profession is unique among professions in that when you're out, somebody has to cover,” Tomberlin said. “Absenteeism on the part of teachers on instructional days represents a real cost to districts.”

The Department estimates that chronically absent teachers cost North Carolina schools about $17 million more per year to pay substitute teachers compared to the cost to cover teachers who miss a typical number of school days.

The report also found that chronic absenteeism among teachers correlates with lower report card grades for their schools and lower EVAAS scores for those teachers, a measure of teacher effectiveness. Both scores are based on student performance on end-of-grade exams.

“It is a severe problem, it has been a problem,” said Principal of the Year Tabari Wallace, who holds an advisory seat on the State Board of Education. “Take a mental health day any day, but don't take 10 in a year.”

Wallace says his school district in Craven County made a policy that teachers must have a doctor's note or give 60 days of notice to take off any Friday, Monday, or day following a holiday -- and teacher absences dropped by 40 percent.

North Carolina Teacher of the Year Lisa Godwin also has an advisory role on the Board. She added that sometimes teachers need more than 10 sick days a school year to care for family members, as she did the year her father was terminally ill.

Tomberlin explained that one policy issue contributing to overall teacher absenteeism is that some schools interpret state policy on extended sick leave to allow teachers to access an additional 20 sick days compared to other schools.

The State Board of Education called for further study on teacher absenteeism.