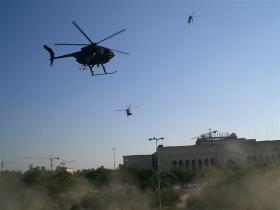 During the early years of the Iraq War, the North Carolina security firm Blackwater received billions of dollars from government contracts with the State Department and the CIA.

But the business began to suffer in 2007 when Blackwater contractors opened fire in a public square in Baghdad, killing 17 Iraqi civilians. The incident severely damaged American relations with Iraq. Today, four Blackwater guards are on trial.

A New York Times report outlines newly released documents that suggest while the State Department conducted an investigation of the firm prior to the shooting, a Blackwater agent threatened to kill a State Department employee.

Host Frank Stasio talks with News and Observer reporter Joe Neff about the new documents and Blackwater's relationship with the State Department.