Some Counties Cut Early Voting Sites Because Of New Requirements 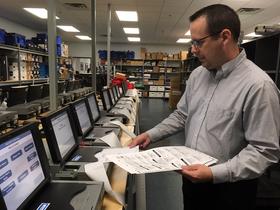 All early voting locations across North Carolina will now have to be open the same weekday hours — 7 a.m. to 7 p.m.  Lawmakers changed this over the summer after county budgets were already set, causing local elections directors to scramble. In some counties, it means fewer places for people to vote early.

Gaston County Elections Director Adam Ragan had planned on having five early voting locations spread out throughout the county. But now, he can only afford to have three.

“Early voting is very popular in Gaston County and I would have loved to have had more early voting locations,” Ragan said. “But we just, it came down to having more locations helping more voters versus our fiduciary responsibilities to the county.”

That’s because lawmakers changed the law mandating uniform hours in late June after local elections budgets were approved. Ragan had to decide which to keep open. To someone who loves elections, it was a hard decision. Behind him are portraits of Thomas Jefferson, Teddy Roosevelt and John F. Kennedy underscored by a red, white and blue feather boa. He even has an Uncle Sam wig, red and white striped pants and a blue jacket in the office.

“I wear the costume once a year [on National Voter Registration Day]," he said. “And I go stand out there and wave at people and everything.”

This day, he’s testing voting machines ahead of early voting starting Oct. 17. Even though there will be fewer locations than in the 2016 election, he will have to hire about the same number of poll workers to cover the expanded hours — which brings him $27,000 over budget. The flexibility to cater to voters is now gone.

“This way every place is open the same amount of time and that allows us to spread it out throughout the county,” Fletcher said. “And have the same hours everywhere, so it’s a little bit less confusing.”

Fletcher said it’s too bad the western part of the county and the library in Gastonia won’t have an early voting site like in 2016. But, he said many of the local Republican voters go on Election Day anyways.

Democratic Gov. Roy Cooper vetoed the bill but was overridden by GOP lawmakers.

In a statement on his veto, Cooper said, “This Republican legislature is once again reducing access to the ballot box. We should be making it easier for people to vote, not harder.”

Ron Phillips, with the Gaston County Democratic Party, agrees the more chances to vote the better. He’s withholding judgment about the early voting law until after the election, but he does think the decision is part of a larger pattern by lawmakers.

“Since 2010, a lot of the decision-making that is normally left to the counties and the cities seem to be slowly ebbing away,” Phillips said, “Raleigh seems to be taking more and more of that decision-making power into their own hands.”

Statewide, there will be almost double the hours for early voting in this election than there were in 2014. But the state Board of Elections said there will be 17 percent fewer sites. More rural counties with smaller election budgets are disproportionately impacted by this change. More populous counties with larger election budgets — like Mecklenburg — can still afford to keep lots of early voting sites open. MIT Political Scientist Charles Stewart III said the state has been here before.

In 2013, lawmakers reduced the number of early voting days but required the same number of hours. So, Stewart said, some counties kept polls open longer.

“A lot of counties ended up offering voting at times when voters didn’t want to take advantage of it,” Stewart said. “And so it really is a matter of matching the hours to the times when voters want to use the method. And then more places makes it more convenient to people.”

What Stewart fears is there will longer be lines on election day.

“It’s going to be masked because midterm elections tend to have lower turnout,” he said. “And so you won’t get real bad problems that you are likely to get in 2020. When election day voting becomes overrun.”

Other counties, like Iredell, had to cut early voting sites by half. Becky Galliher has been the elections director there since 2000. As she put it, "There is no such thing as a normal election anymore in North Carolina."

“There is always some changes,” Galliher said. “Whether its laws or directions from the state. Something changes and you just go with the flow and make it work.”

The question remains: will voters adapt as easily?