North Carolina Senator Thom Tillis is applauding the Trump administration's decision to end the Deferred Action for Childhood Arrivals Program, or DACA. Tillis said Tuesday morning it should be up to Congress to set a long-term policy on the status of immigrants who arrived as children. 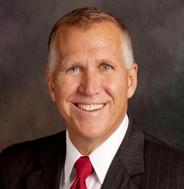 He says he'll introduce legislation in the next week to provide a "fair and rigorous path for undocumented children to earn legal status."  Tillis says his bill would require immigrants to be working, pursuing  higher education or serving in the military.

Attorney General Jeff Sessions formally announced Tuesday that the Trump administration is rescinding DACA. Sessions said the administration would give Congress time to pass legislation. About 800,000 people nationally have gained DACA status since 2012 - about 27,000 in North Carolina, according to the Pew Research Center.

“Immigration policy must be set through legislation, not executive orders. That was the fundamental flaw underpinning DACA and the reason it’s highly unlikely to survive a legal challenge," Tillis said in a statement.

The Senate bill would be similar to one introduced last March in the House by Rep. Carlos Curbelo of Florida. Dubbed the Recognizing America's Children Act, it so far hasn't progressed in the House.

Like DACA, that bill would apply to undocumented immigrants who came to the U.S. when they were under 16 years old. They would have to have been in the U.S. continuously since Jan. 1, 2012.

For those now over 18, the House bill would require that they have a high school diploma or equivalent, be admitted to an institution of higher education, or have a valid work authorization. It also says they must be of "good moral character."

Charlotte’s Latin American Coalition says Tillis’s proposal still makes it too hard for these immigrants to become citizens. But director Jose Hernandez-Paris says he’s encouraged that it would include a path to legal status for those covered by DACA.

"We know that this is not a perfect solution; however, we understand the legislative process, and are very encouraged by the Senator’s inclusion of a path to citizenship in his original proposal," Paris said in a statement Tuesday afternoon. "We will continue to strongly advocate for a less-restrictive policy and for a no-strings attached approach to a permanent legislative solution."

Tillis said he hopes Democrats will get on board with the legislation.

"I know this kind of common sense legislative fix can and should unite members of Congress, and I’ll be working closely with my colleagues on the path forward. It’s up to my Democratic colleagues to decide whether they want a permanent solution or to make this a political wedge issue. I hope they’ll choose bipartisanship,” he said.

U.S. Rep. Robert Pittenger said that President Trump is correct to ask Congress to review DACA. He says even though the so-called "dreamers" were brought here as children, there's still the rule of law. He doesn't want new legislation to make any exceptions.

Democratic Representative Alma Adams of Charlotte called Trump's move unacceptable and says she will work to defend DACA. She says for many in the DACA program, the U.S. is the only home they've ever known. They're neighbors, friends and taxpayers, she says.

Immigrant groups around Charlotte are planning events to speak out against the end of DACA.

A midday rally was being held Tuesday in Raleigh, outside a courthouse across the street from the state capitol building.

This piece was updated to reflect that while the Latin American Coalition finds it encouraging that Tillis's proposal includes a pathway to citizenship, the group doesn't support the plan.

Sept. 5, 2007, Department of Homeland Security fact sheet on the end of DACA

Immigrant groups in North Carolina are mobilizing amid reports that President Donald Trump may end the DACA program, while giving Congress six months to come up with a possible replacement.