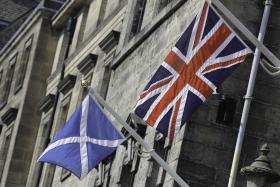 The people of Scotland will vote next week on whether to become an independent country.

As the referendum approaches, many are examining the long legacy of the British Empire. Michael Newton, a scholar at the University of North Carolina at Chapel Hill, spent years studying Scottish history and the impact of the empire and early globalization on marginalized Scottish communities. He documents how the mass emigration from Scotland in the early 1700s led to large settlements of Gaelic-speaking Highlanders outside of Scotland. One of the largest Highlander populations settled in Cape Fear region of North Carolina.

Host Frank Stasio talks with Newton about the Scottish Highland community of North Carolina and what its history indicates about the long-term tensions that may have led to Scotland's pursuit of independence. Newton will be giving the talk "From Highlanders to Tar-Heels: Scottish Gaelic Immigrant Communities in North Carolina" on Monday, September 15 at 5:30 p.m. at the Donovan Lounge in Greenlaw Hall on the UNC-Chapel Hill campus.