TweetShareGoogle+Email
Listen
Listening...
/
Jeff Tiberii reports on the first and only debate between incumbent U.S. Senator Richard Burr and his challenger, Deborah Ross.

North Carolina voters will help to determine the balance of power in the United States Senate next month. Republican Incumbent Richard Burr is seeking a third, which he says will be his final. Democrat Deborah Ross has provided a tougher than expected challenge.

Last night, the two major party candidates deliberated over foreign policy, voting records and Donald Trump at the first and only televised debate between the two Senate hopefuls.

Related: The Political Junkie On Where NC Stands As A ‘Battle Ground State’

The forum between Richard Burr and Deborah Ross offered only a few sparklers, compared to this week’s presidential and gubernatorial debates filled with political fireworks.

The vitriol, interruptions and personal attacks were far more limited. ABC White House Correspondent Jonathan Karl moderated the event. And to the surprise of no one, Donald Trump was a central theme.

Karl asked Burr, who serves as the current chair of the Senate Intelligence Committee, if he has any concerns about Donald Trump handling the nuclear codes.

Burr is a two decade incumbent in Congress, having served in both the House and Senate. He wore a purple tie and his body language was relaxed throughout the hour.

Ross served four years in the North Carolina General Assembly. Wearing a pink dress and gold necklace, she appeared tense in her first debate of this kind.

“Donald Trump is an entirely different matter,” she said. “Donald Trump has encouraged people to hack into our email servers. He has talked about the nuclear codes as you’ve mentioned. And he has bragged about sexually assaulting women.”

Burr, not only a supporter, bud a foreign policy advisor to Trump, reiterated his stance that as the son of a preacher he was taught to forgive. Ross responded with this:

“I completely understand forgiveness,” she said. “You can forgive somebody, but you do not trust that same person with the awesome responsibility of commander-in-chief.”

This race has been closer than strategists had initially thought. An aggregate of recent polls has Burr up by less than two points and many consider this race a toss-up. Democrats need to pick-up five seats to take majority control of the U.S. Senate. Ross is running as an outsider, with the standard rhetoric of hoping to fix Washington.

“Our immigration system is broken and Congress has not addressed it,” she said. “It compromises our security, it hurts our economy and it breaks up families. I would have voted for the comprehensive bipartisan reform bill that came before Congress three years ago.” 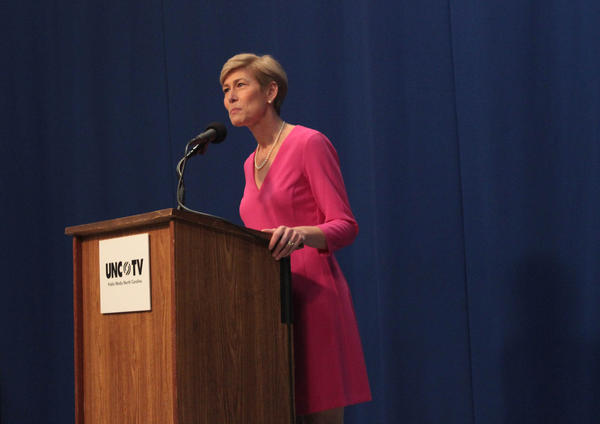 Ross has criticized the incumbent for special interest alliances, and for getting rich while in office. Burr made a move to debunk that claim last night – explaining his wife has found success in real estate, and accusing his challenger of hitting below the belt.

“This is the first time in 22 years, 24 years to be exact, that my family has been brought into a campaign,” he said. “I’m proud of my wife. I find it disgusting that anybody would question her success. And I think quite frankly my wife deserves an apology.”

Ross did not apologize, saying instead she has the utmost respect for Mrs. Burr, before pivoting to criticize the Senator for voting against bills that would have provided equal pay for women. The somewhat subdued debate took place at the UNC-TV studios at Research Triangle Park in Durham

David McLennan, a political science professor at Meredith College, said whether the debate ultimately makes a difference in the race will depend on what happens in the days after.

“Both of these are relatively unknown in the state,” he said. “And that sounds kind of funny talking about an incumbent member of the U.S. Senate and someone who has been in federal office for such a long time, but he doesn’t maintain a high profile in North Carolina. And Deborah Ross was never expected to be the Democratic nominee for this particular position.”

But the Democrats settled on Ross, a former head of the state ACLU. Both campaigns will tout strong performances as Burr and Ross head into the home stretch. Early voting begins in six days.

Note: The photos in this post are part of a collaboration with students and faculty at the School of Media and Journalism at the University of North Carolina, Chapel Hill.

Burr - Neither Trump Or Clinton A Role Model

North Carolina Senator Richard Burr says neither Hillary Clinton or Donald Trump are role models.  But the Republican still stands behind the GOP nominee as Burr faces his own tough re-election bid.

During an informal 30-minute talk with employees at Thermo Fisher Scientific in Asheville, Burr never said Trump or Clinton’s name.  He made it clear though he thinks neither is a role model, which Burr reiterated with reporters later.

“I’m not sure I’d hold up either of them to my grandchildren and say ‘Here’s someone you can mirror’”, says Burr.

Democratic US Senate candidate Deborah Ross is locked in a tight battle with Republican incumbent Richard Burr.  The closeness of the race is a surprise to some analysts who predicted Burr would cruise to re-election.  Ross is visiting the Asheville area Tuesday 9/13 at the Enka Library in Candler from 4 to 5.  She spoke with WCQS's Jeremy Loeb Monday by phone on the way to Asheville.  It's the same day her campaign announced if elected Ross plans to hold community roundtables in every region of the state to hear the voices of North Carolina residents.

Little-known former Democratic state legislator Deborah Ross is counting on public anger over the GOP political takeover of North Carolina to help her upset two-term U.S. Senator Richard Burr, a victory that could also help hand control of the U.S. Senate back to Democrats.  Despite scant name recognition at the start of the election, Ross has pulled even with Burr in the polls in a state that is split almost evenly ideologically.

In 2014, the race between Kay Hagan and Thom Tillis set the record as the most expensive U.S. Senate election in history.

In contrast, the 2016 race between Republican Richard Burr and Democrat Deborah Ross has been a bit of a sleeper. But that seems about to change.

With a goal of keeping the chamber in GOP hands, the Senate Leadership Fund said Thursday that it's reserving ad time starting Sept. 13 in nearly all of the state's TV markets. A nonprofit arm of the fund previously announced $2.5 million in ads praising Burr for efforts to preserve Medicare.