Report: Entire NC Communities Will Be Affected By Sea-Level Rise 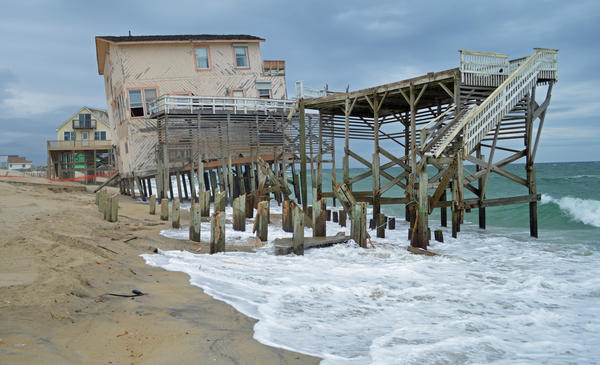 In 30 years, more than 15,000 North Carolina homes will be chronically inundated, meaning they're flooded about every other week, according to the Union of Concerned Scientists. The nonprofit advocacy group released a report today showing where and when sea-level rise is likely to impact residents' daily lives.

The interactive map below shows which North Carolina ZIP codes have the most homes at risk by 2030, as well as the total value of those homes. Data from Union of Concerned Scientists, graphics by Jason deBruyn.

By the year 2045, about 2,000 homes in Nags Head and Hatteras can expect flooding every other week, , if the data are sorted by county subdivision, according to the report. The union analyzed climate and real estate data to determine where and when sea-level rise is likely to become a daily problem, according to Spanger-Sigfried.

The Union of Concerned Scientists has an interactive map on its website, showing the impacts of coastal flooding.

Correction: This story has been updated to reflect the time period of affected properties in the map. The data show impacted properties for the year 2030.

A report on sea level rise in North Carolina points to dozens of coastal communities that face chronic flooding over the next century.

North Carolina's inland cities could have an unforeseen influx of residents from the coast due to sea level rise.

Coastal Carolina officials may not be willing to prepare for climate change until it's too late, according to a new study out of N.C. State and Appalachian State Universities.

A geologist with decades of expertise in climate change and coastal erosion has resigned from the state science advisory panel he helped found. Stan Riggs says politics have made the panel "ineffective."