The Psychology Behind Making Healthier Choices 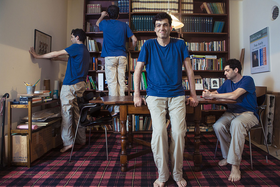 Summer is filled with temptation. We know that fresh fruit is a healthier choice than ice cream. A ripe watermelon can be just as sweet, but often times we pass it by for a double scoop in a waffle cone. The barrage of pool parties and cookouts combined with summer vacation may leave many struggling to make and keep health commitments.

Listen
Listening...
/
Guest host Anita Rao speaks with Dan Ariely, the James B. Duke Professor of Psychology and Behavioral Economics at Duke University, about the psychology behind making healthier choices.

Dan Ariely, the James B. Duke Professor of Psychology and Behavioral Economics at Duke University, says the process of losing 20 pounds can take as long as a year and many find it discouraging. He is working to uncover the psychology behind healthy choices and provide solutions using technology, apps and social media.

Of the technology being used, Ariely recently unveiled a numberless scale called Shapa. The scale comes with an app that encourages small, manageable steps, and rewards users based on behavioral changes with less emphasis on weight loss. Success is determined on personal progress over a three week period not the number on the scale. He believes people know what is good and bad for them, but it is the execution of these rules that cause people to go awry. Ariely shares the discoveries he has made about the psychology and behavioral economics behind weight loss and how to overcome the struggle to manage health.