The rally at Durham's jail and court complex began with 100 protesters marching to symbolically surrender to deputies for the toppling of the statue. Three protesters were arrested on outstanding warrants related to the protest that took down the bronze Confederate soldier on Monday. That brought the total number of people arrested in the incident to seven.

At least a dozen others who tried to enter the jail were turned away by deputies who checked their names in a computer and found no warrants.

Pastor Cleve May of CityWell United Methodist Church says the statue was a symbol of bigotry. 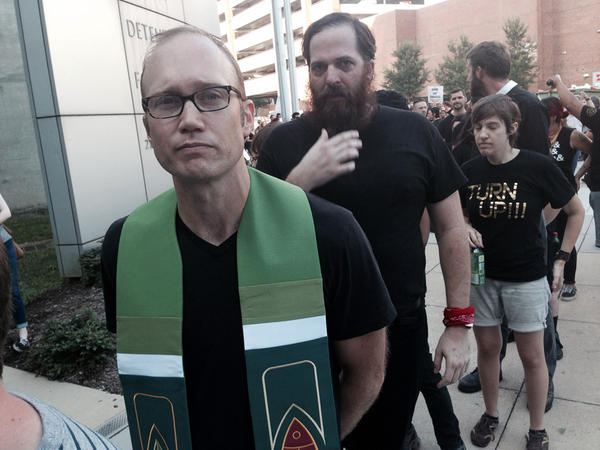 The Durham County Sheriff has said he will continue to pursue felony charges against anyone involved in bringing down the monument.

Several miles away, Duke officials discovered early Thursday that the carved limestone likeness of Lee had been defaced. The statue in the entryway to Duke Chapel had scuff marks on its face and damage to its nose. Lee is one of 10 historical and religious figures depicted there, including Thomas Jefferson.

Duke was reviewing video footage from outside the chapel and hadn't determined who was responsible.

Duke President Vincent E. Price issued a statement saying he had already been meeting with members of the Duke community to discuss how to deal with strong reactions to the statue.

"For an individual or group of individuals to take matters into their own hands and vandalize a house of worship undermines the right ... of every Duke student and employee to participate fully in university life," he said.

The statues at Duke and in downtown Durham are among several vandalized around North Carolina amid a debate on race stoked by a violent rally in Virginia over the weekend organized by white nationalists. Statues in Wilmington were defaced this week with paint.

The nearly century-old statue of a bronze Confederate soldier in downtown Durham came down Monday night after protesters climbed a ladder, attached a rope and yanked it off its pedestal.

"I feel a lot of support behind me. I feel powerful. I'm glad that I'm here," said Elena Everett, who did have an outstanding warrant and turned herself in. "I think everyone needs to be involved in removing symbols of racism from public spaces."

Along with Everett, Aaron Caldwell and Raul Mauro Arce Jimenez turned themselves in Thursday and were arrested. They were each charged with a felony count of rioting and three misdemeanor charges of damaging property. While they were being processed, dozens filled the hallway in the adjacent courthouse outside a hearing for protesters arrested earlier in the week. They weren't allowed in the courtroom because the sheriff said there were fire safety concerns.

Scott Holmes, a lawyer representing the protesters, said afterward that the felony rioting charges are too harsh and a bad fit for what happened Monday. He hopes that the district attorney will drop some or all of the counts.

"What happened was not a riot. It was a celebratory mood; there was no violence against people," said Holmes, who also teaches law at North Carolina Central University. "The deputies who were there felt no need to intervene to protect any persons, and so at most this is an act of vandalism."

Photographer Discusses Charlottesville Unrest, Why He Feared For His Life

Photographer Alvin Jacobs of Charlotte does what you’d expect a photographer to do: Lots of personal portraits and fashion photography are in his portfolio.

And then, he has a passion project. He travels to cities with social unrest. He’s captured protests in places like Ferguson, Baltimore, Charlotte. Last weekend, it was Charlottesville.

A bill passed by the North Carolina House of Representatives that would protect drivers who injure protesters with their car while "exercising due care" is getting renewed attention in the wake of last weekend's deadly Virginia protests.

UPDATE 9:50 a.m. Tuesday - Asheville police have arrested 38-year-old Michael Patrick Faulkner and charged him with simple assault for the incident that took place Sunday evening at a demonstration in Pack Square.  The Asheville native is charged with assaulting a WLOS television reporter during a Facebook live stream.  Earlier story below -

The events in Charlottesville over the weekend hit close to home for many North Carolinians. Debates over Civil War and Confederate monuments and the recent rise of white supremacists are certainly topics we’ve dealt with here in recent years.

But for one woman from The Triangle, the deadly attack in Charlottesville was personal. Her name is Susan and we’re not including her last name because she fears reprisals from white supremacists.