Preserving The Stories Of The 'HIV Pioneers' 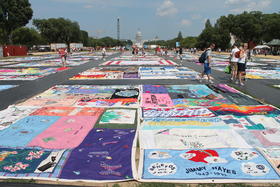 According to the United Nations, more people are living with HIV than have died since the epidemic began in the 1980s. There have been large medical and social advances for those diagnosed with HIV and AIDS. But many of those early researchers, advocates and survivors are nearing the end of their lives.

Guest host Anita Rao talks to Wechsberg about the importance of preserving this stories and the lessons that can be learned from them. Dr. Charles van der Horst joins the conversation. He contributed to the book, and he is an emeritus professor in medicine and infectious diseases at the University of North Carolina at Chapel Hill School of Medicine. He writes a regular column for The Herald Sun in Durham.