State Superintendent Mark Johnson is asking teachers whether or not they would like to be armed. So far, most say no. Johnson sent an informal, online poll in an email to all of the about 100,000 public school teachers across the state Thursday morning and received more than 19,000 responses in the first 24 hours.

Under a North Carolina law, it is illegal for a person to carry a gun, open or concealed, on educational property unless he or she qualifies as emergency personnel or law enforcement.  However, debate over arming teachers has fired up locally and nationally following recent school shootings and President Trump's endorsement of the idea.

Johnson has come out against arming teachers, saying they have enough on their plate, but that he'd like to see more funding for school resource officers. Johnson said as much publicly after the mass school shooting in Parkland, Florida, and reiterated the statement in a video message to teachers that accompanied the poll.

"It was really important for us to let teachers know what my opinion is, but that we really want to hear from them," Johnson said.

The Department of Public Instruction has shared the preliminary results of the poll. 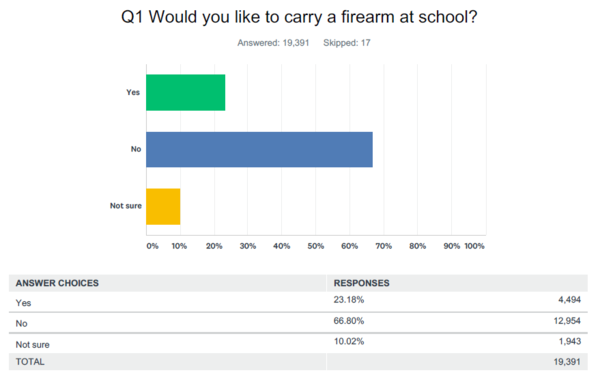 The poll also asked whether teachers would like to have certain trained teachers or administrators have access to a firearm. Half said no, while 40 percent said yes. Again, 10 percent said they were not sure. 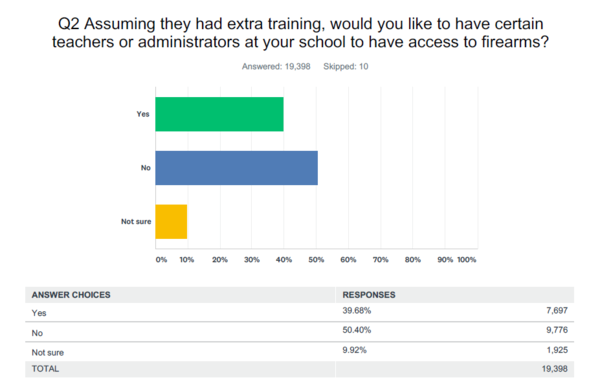 Johnson said the poll, though not scientific, can add to a conversation about policy around school safety. He said that input from teachers would be relevant for budget discussions and in conversations that will take place when the newly appointed joint legislative committee on school safety begins to meet.

The N.C. Educator Perspectives Poll is a tool that Johnson and the Department of Public Instruction occasionally use to gain insight on teachers' opinions. This was the fifth survey Johnson has sent via email. DPI spokesman Drew Elliott said the poll about arming teachers drew by far the largest response, more than twice the response of the next-most popular poll.

"This one was just really timely subject matter," Elliott said.

DPI staff expect to leave the poll open through the end of the school day on Monday.