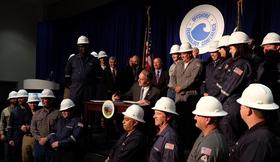 On Friday, President Trump has issued an executive order that opens up the possibility of off-shore drilling in American waters, including off the coast of the Carolinas.

Secretary of the Department of the Interior Ryan Zinke on Tuesday signed two secretarial orders to put the president’s order in action. The first order directs the Bureau of Ocean Energy Management (BOEM) to develop a new five-year plan for oil and gas exploration in offshore waters and reconsider environmental regulations. The second order establishes the new position of Counselor to the Secretary for Energy Policy to coordinate the Interior Department’s energy portfolio that spans nine of the Department’s 10 bureaus.

David McGowan is the executive director of the North Carolina Petroleum Council, a division of the American Petroleum Institute which represents America's oil and natural gas industries. He said exploration of oil drilling in the mid-Atlantic is part of the new five-year offshore energy strategy.

"So there's a lot of potential resource out there, which means there's a lot of potential for economic development," he said. "We're still a few years out from that. It's important we go through the regulatory process and we have the public hearings and we do the environmental impact statement so we can have a robust conversation about this issue."

Advocacy and tourism groups along the coast had previously convinced the Obama administration not to pursue offshore oil drilling. McGowan said no drilling is imminent.

"Any potential drilling is a long way off, a minimum probably of 12 to 15 years," he said. "There's a lot of work that needs to be done between now and then. We need to understand what our resource is, where it's located, how much is there, and then be able to make informed decisions about whether to go explore that further."