At Opposite Ends Of The State, Two NC Schools Keep Paddling Alive

ShareTweetEmail
Listen
Listening...
/
Jess Clark reports on two schools on opposite sides of North Carolina that still use corporal punishment.

Corporal punishment is still a legal practice in North Carolina schools. But today there are just two districts in the state where educators still inflict pain on students as a form of discipline.

One is down east in Robeson County. The other is in the mountains of Graham County in western North Carolina. Both districts have school principals who still believe in the power of the paddle.

In Graham County, The Only High School Principal Who Still Paddles

Robbinsville High School sits in a small gap in the Smoky Mountains. Green slopes dotted with a few cattle hug in around the school before they rise into a thick cover of pine trees. If there’s one word to describe this area, it would be "isolated."

The school’s policy allows students to request a paddling in place of in-school-suspension, or ISS. Matheson said this practice keeps students in the classroom.

"Most kids will tell you that they choose the paddling so they don’t miss class. And even though they get their work in ISS… it’s still not like being in the classroom in front of the teacher," Matheson said.

Robbinsville senior Allison Collins said she chose to be paddled her sophomore year, after her phone went off in class.

"That’s like my first time ever being in trouble!" she said.

Collins went to the assistant principal’s office, where she was told she had a day of ISS. Collins told Principal Matheson she’d rather take a paddling, and Matheson called her father to get his permission.

"And my dad was like, 'Just paddle her.' Because down here in the mountains, we do it the old-school way," she said.

Matheson said he only paddles a student if he gets permission from the parent. Very few parents opt out, he said.

"I think that’s one of the reasons so many parents are good with it," he said. "It’s not something where I’m saying 'Hey this is how I'm going to deal with your child.' It’s something that the family decides."

In the band room, Robbinsville parent Cheri Lynn was substitute teaching on a recent day.  She also coaches the school's shooting team. Lynn said she and many other Robbinsville families support the use of corporal punishment in school.

In a small, isolated and tight-knit community like the one in Graham County, it’s not hard to see why families might have more trust in their school administrators than families in other districts. Matheson grew up here and went to school with a lot of his students’ parents.

Still not everyone at Robbinsville is onboard.

In a classroom down the hall, student teacher Beau Cronland was taking a breather between classes. Cronland said he’s not comfortable with the school’s use of the paddle.

"Last semester, one of my freshman did get spanked, and that’s how I knew they did corporal punishment here," he said. Cronland said the student's infraction was talking in class.

"Kids talk. I don’t think they should get spanked for it or paddled," he said.

There are decades of research showing corporal punishment leads to bad outcomes for students: higher drop-out rates, increased rates of depression and substance abuse, and increased violent episodes down the road. It's also shown that, like other forms of discipline, corporal punishment is disproportionately inflicted on students of color and students with disabilities. Matheson said he’s seen that research, but he still believes paddling is an effective form of discipline.

"I feel like if it was used more often in our schools we’d have a whole lot better society. I do. I believe that," he said.

In Robeson County, Parents and School Staff Hang On To Longstanding Tradition

Just down the road from the school, Prospect parent Venus Maynor was in his driveway working on a truck he owns for his waste removal business on a recent day.

Maynor said his son Orrie got paddled in second grade for running outside of the line in the hall with another boy.

"The teacher, she pulled him back in line. She said 'Hey we’re going to paddle you for not doing what we asked you to do'," he said. "And of course she made good on her promise. She paddled him when they got back to the room with a witness."

State law requires a teacher or administrator to serve as a witness to uses of corporal punishment. 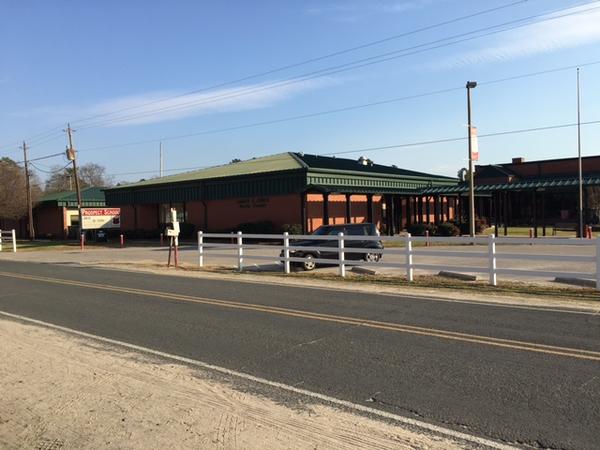 Maynor supports the use of paddling in school. He said he believes paddling or spanking is an important part of raising a child. He points to tall tree on the edge of his property.

"If you go to that big pine tree over there - that mature pine on the ditch there. You can’t do anything but cut it down. There’s no sway in that tree," he said. "If you start early with that sapling over there, you can tie a string to it and pull it, and it’s going to grow the way you tie the string. And in respects to raising a child, it’s the same way."

It’s not unusual for parents to support the use of corporal punishment as a form of discipline. Recent surveys show about 75 percent of Americans believe it’s sometimes necessary to spank a child. What is unusual is that these parents support corporal punishment in school. That’s where Tom Vitaglione of child-advocacy group NC Child takes issue with the practice.

"When it gets to schools, we now have an agent of the state hitting a child," he said. "And we don’t believe that should happen, and that cultural issues should not override that perspective."

"I do. I trust the teachers and the principal to do what’s right," he said.

Still, even in these two communities, paddling is on the decline. Last year, both districts cut their number of paddlings in half. Statewide, total paddlings statewide fell from 147 from 2014 to 2015, to around 70 from 2015 to 2016. That's a fraction of the 679 paddlings delivered from 2008 to 2009. It's an even smaller fraction of the thousands of students who are paddled each year in other states where corporal punishment is legal. In Mississippi for example, more than 32,000 students experienced corporal punishment from 2011  to 2012.

NC Child’s Vitaglione and other child advocates would like there to be zero paddlings in North Carolina. They’re asking state legislators to outlaw the practice in schools for good.

The use of corporal punishment as discipline in North Carolina schools is now practiced in just three counties.  Child advocacy groups are urging them to end it, saying that it does more harm than good. Davin Eldridge has more.