At WakeMed Health and Hospitals, the emergency department stays busy around the clock. More than ever, it's not just chest pain or trouble breathing that brings people in.

The Raleigh hospital isn't alone. As the opioid epidemic rips through middle America, emergency departments see their revolving doors turn more often with patients in the middle of an overdose.

Listen
Listening...
/
Jason deBruyn reports on the opioid epidemic and how it has affected hospital emergency departments.

Since 2012, emergency visits across the state that include a substance abuse diagnosis have increased nearly 75 percent, according to data from the North Carolina Hospital Association.

As eye popping as the raw numbers are, Dr. Graham Snyder, director of Emergency Medicine Education and Medical Director of the WakeMed Simulation Center, says they don't even capture the full impact. 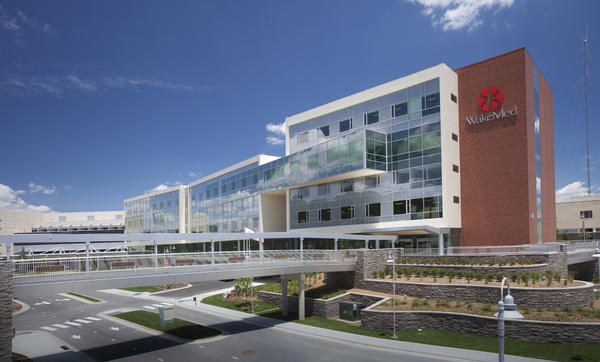 No hospital in the state has been spared. In some ways, these are the toughest emergency cases, says Christian Lawson, director of emergency services at UNC Health Care.

These additional ER visits strain already-overcrowded emergency departments. For years, hospital EDs have shouldered the brunt of the need for more mental and behavioral health care. Because substance abuse and mental health often go hand in hand, the rise of the opioid epidemic has put more weight on their shoulders. 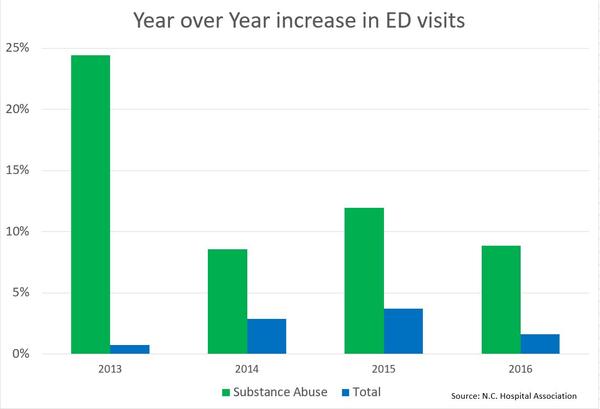 "Emergency departments are not equipped to be able to provide comprehensive mental health or substance use disorder treatment. That's not what they're designed to do and they don't have the staffing especially in the rural communities," said Julia Wacker, the N.C. Hospital Association vice president of Community and Behavioral Health. "Patients are visiting hospitals because of a mental health or substance-use disorder crisis of some sort. And the emergency department is struggling to find appropriate treatment services for them. And as a result, those patients are waiting in emergency departments an average of about three days for a community hospital inpatient bed, and an average of about five days for a state hospital bed. Some patients are waiting weeks and even months. Particularly those that are the hardest to treat, or the hardest to find treatment services for, including the elderly and children.

This means some hospitals act more like hotels than medical facilities.

"For the most part they are literally boarding. I hate that term because that's the term we use when need to put our animals somewhere when we go on vacation and clearly these individuals are not animals. They are patients that need care just like anyone else," said Wacker. "However unfortunately that is essentially what is happening. The facilities are providing room and board. They are at capacity with what they can do to provide medical services for these patients and then you've got all these behavioral health conditions that they just don't have the appropriate resources."

In contrast to some other drug epidemics, addiction to opioids has affected nearly every group of people.

"It is every race, every age group, from rich to poor," said Snyder.

The medical community has largely advocated a strategy to fight the epidemic that helps those struggling with addiction, not punishes them.

"These aren’t criminals who aren't out to get high," said Snyder. "These are people who probably went to their doctor and said, 'Hey, something hurts.' And got a prescription. And you know what? It made them feel better."

On June 20, 2016, Gov. Pat McCrory signed a law making it easier for any North Carolinian to buy Naloxone, a drug that reverses an opioid overdose. Health care officials nearly unanimously praised the move.

"When a person has an addiction, you think, 'They're an addict. That's a bad person. A weak person. A person who's nothing like me.' And so I don't need to worry about that," said Snyder. "Well you do need to worry about it. Because anyone who has ever tried to quit smoking knows, it's not easy. You also know that smoking's probably going to kill you, yet it's still hard to quit smoking. And when you quit smoking, you feel bad. But it is not one-hundredth, probably not one-thousandth as bad as the pain that you go through when you quit narcotics. So none of us are above that. It's none of us that can say, 'That's not my problem, that's other people who have those problems.' We all need to be involved in that. And support both legislation and public initiatives to control this problem or we will all face the consequences."

Substance abuse advocates vocally agree with this standpoint and have applauded initiatives like the one signed by McCrory last year. Accompanying the praise for current initiatives, however, is a question of where the compassion was during the crack epidemic of the early 1990s. The public policy response at the time was one of strict law enforcement to get tough on crime.

"I think we learned a lot in addressing the crack cocaine (epidemic), also the crystal meth (epidemic) that was in certain pockets of the country," Lawson said. "I think we in health care have learned through our professional organizations how to communicate best practice. Get support on a larger, broader level more quickly."

Wacker argues that a comprehensive care strategy must include better options for mental and behavioral health. "The issue is that for the most part, somebody doesn't just wake up one day addicted to opioids. There is some sort of underlying addiction, some sort of underlying mental health condition. There is something else that needs some serious attention and treatment. And so while emergency rooms can treat the acute medical episode related to an overdose, they are not equipped to be able to truly provide that comprehensive addiction care and treatment." 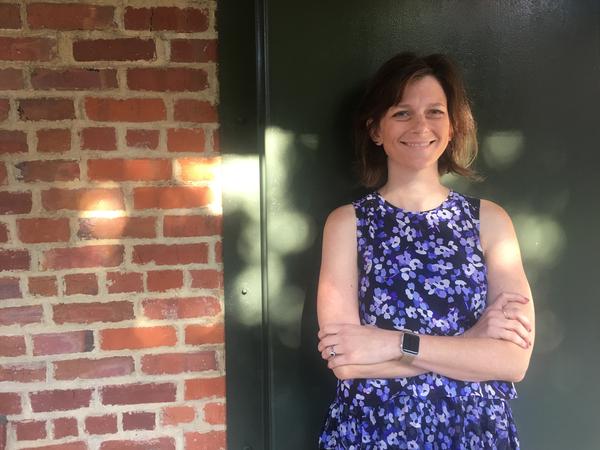 Policymakers have taken some positive steps, but more needs to happen, according to Wacker. But addressing the larger issues requires more funding, which has long eluded advocacy groups.

"We are not doing ourselves any favors from the systemic point of view, by trying to dismantle the opioid problem and not understanding that we can't dismantle the opioid problem without also addressing and providing good comprehensive care for those mental health conditions," said Wacker. "We need to understand that for many patients just having access to Naloxone is not going to be sufficient to actually provide treatment for them. Again, if you are suffering from an underlying serious depression disorder, then having access to Naloxone is not going to do anything about the depression. And so, you are going to end up right back where you were with needing to take the opioids in order to get back to the state that they want to be in. And, more likely, even have to increase the dosage."

The opioid crisis is affecting all of the U.S., and Western North Carolina in particular.  And it is showing no signs of slowing down in the region's most populous county.  In the first 8 months of 2017, 230 visits to emergency departments were reported in Buncombe County, as opposed to just 84 during the same time frame last year.

A needle exchange program in Asheville has been running out of supplies on a monthly basis for over a year.  That's according to Michael Harney, co-founder of the Needle Exchange Program of Asheville.  Harney says the group goes through about 60,000 needles a month but can't keep up with the demand for clean needles.  The program operated for years before the exchanges were legalized as a way to ensure those addicted to drugs don't share needles and spread blood-borne diseases like HIV and Hepatitis B and C, which are on the rise in North Carolina.

Tackling the Opioid Crisis and its Ripple Effects

The opioid crisis is taking an acute toll and nowhere is immune, including here in North Carolina.  North Carolina Attorney General Josh Stein says four people die every day in North Carolina from an opioid overdose.  With that in mind, a mixture of lawmakers, law enforcement, first responders, health professionals and advocates of Buncombe County were on hand to hear from Stein recently.  He’s made tackling the issue one of his top priorities since taking office, spearheading a bipartisan bill called the STOP Act.

Hepatitis B And C Are Rising: Drug Users And Baby Boomers At Risk

New cases of hepatitis B and C have risen significantly in North Carolina in recent years. In response, state health officials are warning those at a higher risk for the infection to get tested.

Hoarding $70 million in Medicaid money that should be spent on patients while spending lavishly on CEO pay and luxury board retreats. These are just some of the findings laid out in a state audit of Cardinal Innovations Healthcare. The company says the spending is justified.