One Man Asked For Nearly 600 Absentee Ballots In Bladen County 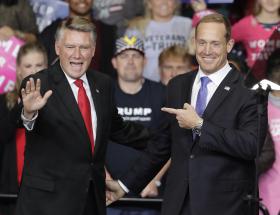 One man – McCrae Dowless – filed in-person requests for 592 absentee ballots at the Bladen County Board of Elections in the month's leading up to this year's midterm election.

That's more than twice any other single applicant and accounts for 44 percent of the 1,341 in-person absentee ballot requests made at the Bladen County Board of Elections.

Taking a step back to look at all absentee mail-in ballots for Bladen's portion of the 9th Congressional District, just 19 percent were cast by registered Republicans. However, 61 percent of those ballots went to the Republican candidate Mark Harris. Not only was Bladen the only county for which Harris won the absentee mail in ballots, but such a vast disparity of vote totals compared to registered voters stands out to political and data analysts.

Taking another step back: across the entire 9th Congressional race, which includes Bladen County, there were 3,500 non-returned absentee-by-mail votes, by far the most of any Congressional race. These factors have contributed to the N.C. Board of Elections not yet certifying the election, as investigators look for answers to these irregularities.

In a brief phone conversation with WUNC, Wooten accused McCrae Dowless of absentee ballot fraud in this election, as well as a previous one, but did not elaborate before hanging up.

All data come from the N.C. Board of Elections, which began releasing documents related to allegations of fragrant absentee ballot fraud in the 9th Congressional race. The state board of elections has not certified that race. Republican Mark Harris leads Democrat Dan McCready by 905 votes.

Absentee ballots in the 9th Congressional race have drawn attention because of the unusually high percentage that were not returned. Not all voters who request an absentee ballot end up filling out and submitting that ballot back to the board of elections. But in the Harris-McCready race, an extraordinarily high number of ballots were not returned. Political analyst Michael Bitzer has tracked North Carolina elections closely for years. In a blog post this week, he notes the high rate of unreturned ballots in the 9th race, and especially high in Bladen and Robeson counties.

These irregularities have investigators looking at those two counties and seem to be homing in on activities linked to a longtime political operative from Bladen County, where allegations about mail-in absentee ballots also surfaced two years ago during a tight election for governor.

In affidavits offered by the state Democratic Party, voters described a woman coming to their homes to collect their absentee ballots, whether or not they had been completed properly. State law bars this kind of "harvesting" of absentee ballots, which must be submitted by mail or in person by the voter or a close family member.