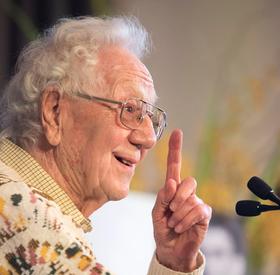 Oliver Smithies, who won the Nobel Prize in physiology or medicine in 2007, died Tuesday at UNC Hospitals. He was 91.

Smithies was UNC Chapel Hill’s first-ever Nobel Prize winner, landing the prestigious award for his contributions to how individual genes work. He developed techniques that used mice as models to target specific genes, leading to the understanding of cystic fibrosis along with a multitude of other diseases.

Kathleen Caron, the chair of the Department of Cell Biology and Physiology at UNC-CH, was a former student of Smithies. She reflected on his legacy with The State of Things Host Frank Stasio.

“This methodology for which he won the Nobel Prize is now used broadly in every field of medicine,” said Caron. “And since mice and humans have about 80 percent of our genes that are the same, it’s a treasure trove of discovery for scientists.”

But despite the prestige surrounding his contributions to medicine, Smithies was known in the scientific community for his generosity and constant humility.

“I’ve been part of UNC now for 20 years and hopefully, I’ve helped a little,” Smithies told assembled students and friends on campus after the Nobel announcement. “I sometimes think I’ve been selfish because I haven’t been chairman of anything.”

Smithies was born in England in 1925 and received his degrees from Oxford. He came to Chapel Hill in 1988 from the University of Wisconsin. At that time he was already a renowned scientist.

“Oliver was a truly remarkable person with a joy for life and science," said Dr. J. Charles Jennette, chair of the UNC-Chapel Hill's department of pathology and laboratory medicine, in a release. "His brilliance was paired with infectious enthusiasm that inspired everyone around him.”

"He was a gem, truly a brilliant man, one of the most brilliant people I’ve ever met. But despite that the generosity, and humility, and humor was just wonderful. Because of that he’s touched so many people and enabled science in so many different ways,” said Caron.

In the lecture he gave in Sweden when accepting the Nobel Prize, he said:

“I emphasize the importance of choosing a branch of science that makes your everyday work enjoyable, as mine has been. [“Students: when it was not, I changed it!”] I also emphasize the importance for a scientist to have other interests for diversion (mine is still flying) when science is being fickle. A happy relationship (mine is with my wife Nobuyo Maeda) can also be a source of comfort at such times – and can provide a captive audience with whom to share science’s much less frequent times of bliss.”

Smithies’ later work focused on hypertension and kidney disease. His colleagues say he was still working in his lab seven days a week, 70 years after his career began.

“He was always in the lab, it was impossible to work more than Oliver because he was always there, you always knew where to find him,” said Caron.

In a letter to the campus community, UNC-Chapel Hill Chancellor Carol Folt, celebrated Smithies’ contribution to the academic community.

"A kind and humble man, Oliver was a precious gift who always delighted us with his views on science while he captured our love with his infectious sense of humor and warm personality," she said.

“He was a true scholar and a gentleman, an inspiration to all of us here and to scientists around the world, said Sancar. "I feel especially lucky to have gotten to spend so much time with him over the past year due to our connection as UNC Nobel Prize recipients. I will miss him greatly.”

Smithies’ legacy lives on in the notebooks he kept meticulously.

“He could tell a really great story, and you can flip through the notebooks [that] are now archived and available online and see where those ‘aha’ moments were,” said Caron.

Smithies died after what was reportedly a “very short” illness.