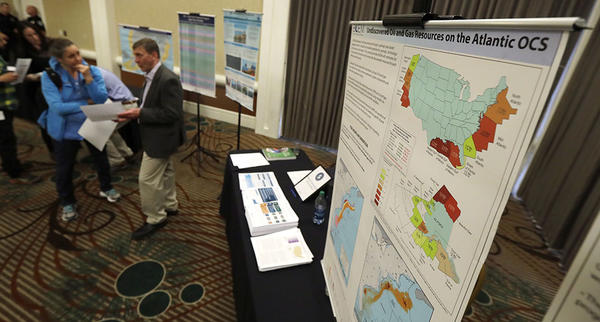 Listen
Listening...
/
James Morrison reports on how the issue of offshore oil drilling cuts across party lines in political campaigns in North Carolina.

President Trump is putting coastal Republicans in a tight spot this election cycle with his proposal to open waters off the Atlantic coast to oil and gas exploration.

The coast is mainly represented by members of the president’s party, but offshore drilling is highly unpopular among voters along North Carolina’s coast.

“To put a percentage on the opposition, I would guess it’s 90 percent plus that is in total opposition,” said Dare County Board of Commissioners Chair Bob Woodard.

Woodard is a vocal opponent of offshore oil and gas drilling. He has spoken with both Governor Roy Cooper and Interior Secretary Ryan Zinke about his opposition to drilling.

Woodard is also a Republican, although he said this is a bipartisan issue in the Outer Banks.

“You got seven governors all the way from Maryland to Florida, four Dems and three Republicans opposed. So I’d say that’s bipartisan,” he said.

The Dare County commissioners are unanimous in their opposition to drilling, along with most other coastal municipalities in North Carolina, Virginia and South Carolina. Brunswick County has 13 municipal resolutions against offshore oil and gas drilling, which is more than any other county in the nation.

While this opposition is nothing new, it’s growing stronger. Some Republican candidates have learned this the hard way.

In the Republican primary for state Senate District 1, which includes all of the Outer Banks and some inland areas, Bob Steinberg, who opposes offshore drilling, beat challenger Clark Twiddy, who supports it.

Beverly Boswell, the incumbent for state House District 6, which also spans the Outer Banks, supports offshore oil and gas drilling. And she lost in the Republican primary to Bobby Hanig, who opposes drilling.

Boswell tried to label Hanig an “extremist environmentalist” during the campaign. He flatly denies that accusation and calls himself a conservationist who is also a conservative Republican.

“I believe in Donald Trump. I believe in Make America Great Again. We just disagree on one issue,” Hanig said.

While coastal Republicans may be on the same side as environmentalists when it comes to coastal drilling, they quickly split paths. Hanig and Woodard support President Trump’s push to cut environmental regulations on existing oil refineries. They say there would be no need to drill in coastal waters if we could refine our existing oil supply more efficiently.

And this is where Democrats see an opportunity.

The Democratic party is targeting vulnerable districts this election cycle to break the Republican supermajority in the state legislature.

That’s because of the unpopularity of President Trump’s push for offshore drilling and his roll back of environmental regulations. Democrats think this could be a liability to coastal Republicans.

And they could be right, especially along the state's southern shores. Environmental issues are front and center in Wilmington right now because of offshore drilling and Gen X contamination in the Cape Fear River, according to Erin Carey of the North Carolina Sierra Club.

“If you tell people the water they’re drinking -the water they have given their children and mixed into baby formula- has industrial chemicals in it, people start paying attention, Carey said.

Gen X is expected to be a major issue in elections around Wilmington. In state Senate District 9, Republican Sen. Michael Lee is being targeted by Democrats because he was slow to draft Gen X legislation with co-author Holly Grange, of House District 20.

Both Grange and Lee also support offshore drilling. Their Democratic opponents oppose it.

In state House District 19, which covers Wilmington, Republican Rep. Ted Davis came out against offshore drilling in January after years of support for it. His Democratic challenger, Marcia Morgan, is making coastal waters and Gen X central pillars in her campaign.

But Rouzer’s Democratic opponent, Kyle Horton, thinks she can beat an incumbent in what’s considered a safe district. She’s hoping kitchen table issues like the economy, healthcare and education will resonate with voters who are also concerned about protecting waters inland and off the coast.

“I’m deeply concerned we are rolling back any of those protections that would put our coast and our economy here fundamentally at risk,” Horton said.

Horton herself is a vocal opponent of offshore drilling. She had a family member die when the Deepwater Horizon oil rig exploded in the Gulf of Mexico in 2010.

Coastal Republicans are seeing people’s opinions about environmental issues shift this election cycle, but they can’t chase these voters too far without distancing themselves from a president popular with their base. These candidates will have to oppose environmental deregulation and offshore drilling, while not getting too far from a president - and two North Carolina senators in Washington - who support both those things.

The mayor of Nags Head says members of Congress should vote down a draft bill on offshore drilling.

North Carolina Attorney General Josh Stein sent a letter to U.S. Department of Homeland Security Secretary Kirstjen Nielsen looking for information on election security in North Carolina.  This comes on the heels of last week's indictments by special counsel Robert Mueller of 13 Russian nationals and 3 Russian businesses for interfering in the 2016 election.  Stein joined BPR's Jeremy Loeb to discuss that and other matters.

Gov. Roy Cooper has vowed to take legal action if the Trump Administration does not exempt North Carolina from offshore oil and gas exploration.

Governor Roy Cooper and Attorney General Josh Stein – both Democrats – are calling for the federal government to grant the state a waiver from the Trump Administration’s recently released plan for offshore oil and gas exploration.