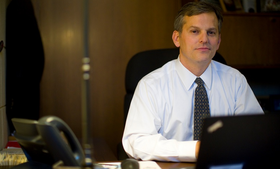 North Carolina Attorney General Josh Stein said in a release that the company “repeatedly deceived prescribers and patients in pursuit of profits.” The lawsuit also accuses Purdue Pharma of targeting seniors and other “vulnerable” populations.

The lawsuit also alleges that the drug company downplayed concerns about opioid addictions by “hyping” a concept known as “pseudo-addiction." Stein defined the idea as "desperate, drug-seeking behavior" that people engage in not because they are addicted, but because they are actually not receiving enough opioids.

Similar complaints were being filed by officials in Nevada, Florida, Tennessee, Texas and North Dakota.

In a statement, Connecticut-based Purdue Pharma denied the claims and said the company will defend itself. A company spokesman added that the state lawsuits will bring costly and protracted litigation.

Stay informed: Sign up for The Frequency newsletter and get WFAE headlines in your inbox every weekday.

State Attorney General Josh Stein's office said in a filing to the North Carolina Utilities Commission he considers its decision to pass along what could total billions of dollars for handling the potentially toxic chemicals in coal ash to be "unlawful, unjust, unreasonable, or unwarranted."

There are more than 15,000 sexual assault evidence collection kits in North Carolina that have yet to be tested, according to the numbers compiled by the Department of Justice and made available by Attorney General Josh Stein’s office and the state crime lab.