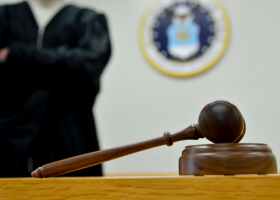 A senate committee looking at judicial redistricting and reform will meet Wednesday in Raleigh, a few weeks after Democrats walked out of a previous meeting.

The Republican chairs had refused to allow a retired superior court judge invited by Democrats to address the committee.

When Democrats submitted a list of proposed speakers for this week's meeting, the GOP chairmen agreed only on two conditions. First, that Governor Roy Cooper's general counsel appear, and second, that Democratic committee members promise not to walk out and to submit their own redistricting proposal.

Democrats did not respond.

Senator Jay Chaudhuri is a Wake County Democrat and one of the committee members.

"We operated on good faith in hopes of a bi-partisan solution on judicial reform and that hasn't been the case thus far," he said. "If this is a bi-partisan effort to find common ground it's incumbent upon the chairs of the committee to hear various perspectives."

Senator Dan Bishop is one of the GOP chairs. He said Democrats have not tried to help in any meaningful way.

The Republican-led committee could come up with a proposal on replacing judicial elections with a merit selection process by the end of the special session starting next week.

Republican lawmakers hope to come up with a proposal for a judicial merit selection process by the end of the special session starting next week.

Moore Predicts Deal on Judicial Maps By End of January

(Associated Press) The North Carolina House leader predicts redrawn election districts for trial court judges can be finalized with Senate Republicans by the end of January. But he's unsure what his colleagues think about a Senate proposal eliminating head-to-head judicial elections.

North Carolina’s Republican-dominated General Assembly has made a number of changes to the way judges are elected in the state, with many more proposals under current consideration.  They include making races partisan and changes to district lines and term lengths, even eliminating some vacancies and proposals to do away with elections for judges altogether.  Former state Supreme Court justice Robert Orr, a Republican, is no fan of the changes.  He spoke with BPR’s Jeremy Loeb about the proposals and about the state of the Republican party under President Donald Trump.