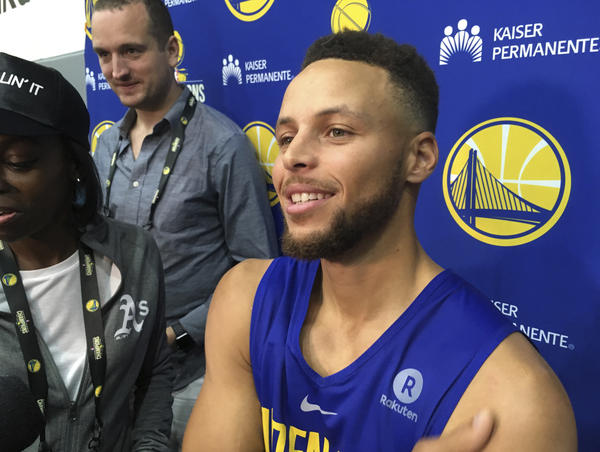 It all started when the President of the United States tweeted at a former student from Charlotte Christian High School.

Stephen Curry – the Charlotte Christian and Davidson College alum – is now one of the most recognizable athletes in the world. He had expressed publicly that he might not accept an invitation to the White House, after the Golden State Warriors won the NBA title in June.

Going to the White House is considered a great honor for a championship team.Stephen Curry is hesitating,therefore invitation is withdrawn!— Donald J. Trump (@realDonaldTrump) September 23, 2017

When he woke up Saturday and saw Trump’s tweets, he was surprised.

“I don’t know why he feels the need to target certain individuals rather than others... I have an idea why.” Curry told assembled media after the team’s first practice of the year. “It’s kind of beneath a leader of a country to go that route. It’s not what leaders do.”

The President did not stop with Curry. In a series of tweets sent almost immediately following his unprompted blast of Curry, Trump called for NFL players who kneel during the national anthem to be fired. It was a continuation of an attack – at times profane – from a speech Trump gave in Alabama the night before.

The attacks drew strong condemnation from across the league, and dozens of players took a knee or locked arms in unity during the national anthem on Sunday.

But not in Charlotte.

No Carolina Panthers players took a knee (although former UNC-Chapel Hill star Julius Peppers did stay in the locker room during the anthem). Panthers owner Jerry Richardson did not condemn Trump’s comments publicly.* Many other owners – and NFL Commissioner Roger Goodell – did criticize the President, in very direct terms.

“Divisive comments like these demonstrate an unfortunate lack of respect for the NFL, our great game and all of our players, and a failure to understand the overwhelming force for good our clubs and players represent in our communities,” Goodell said in a statement.

Soon, every athlete and team was pulled into the controversy.

On Saturday, UNC-Chapel Hill’s national champion basketball team said they would not visit the White House, citing a scheduling conflict. The Tar Heels also did not attend the White House after the 2005 championship, but did go following the 2009 title.

“One of the fundamental rights this country is founded on was freedom of speech, and we have a long tradition of nonviolent, peaceful protest,” said Jordan. “Those who exercise the right to peacefully express themselves should not be demonized or ostracized. At a time of increasing divisiveness and hate in this country, we should be looking for ways to work together and support each other and not create more division. I support Commissioner Adam Silver, the NBA, its players and all those who wish to exercise their right to free speech.”

Two NASCAR team owners from North Carolina, including Richard Petty, had a different view. They said they would fire drivers or others who didn’t stand for the anthem at Sunday’s race.

"Anybody that don't stand up for the anthem oughta be out of the country. Period,” Petty told the Associated Press, from the Monster Energy NASCAR race in New Hampshire yesterday. “What got 'em where they're at? The United States."

Richard Childress, who owns a NASCAR team based in Welcome, N.C., and a winery in Lexington, said any protests from his team would “get you a ride on a Greyhound bus.”