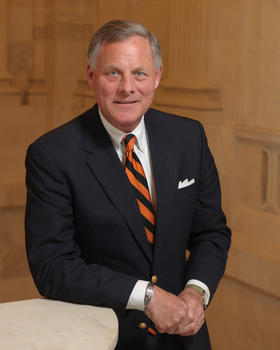 Leaders of the Senate Intelligence Committee say they haven't determined whether Russia colluded with Donald Trump's presidential campaign in an effort to influence last year's election. But, added committee chairman and North Carolina Republican Richard Burr, "You can't walk away from this and believe that Russia's not currently active in trying to create chaos in our election process."

Burr addressed the probe during a Wednesday press conference with intelligence committee co-chair Mark Warner, a Democrat from Virginia. Burr expressed confidence that Russian interference did not sway the outcome of last year's presidential race. "We can certifiably say that no vote totals were affected, that the tallies were accurate," said Burr.

Burr said Russian hackers tested the vulnerabilities of election systems in 21 states. The Department of Homeland Security (DHS) said last month that North Carolina was not among those states. But North Carolina's Board of Elections says DHS has not completely ruled out the possibility that hackers may have tried to attack election software used in the state and provided by VR Systems, a private vendor. Elections board spokesman Patrick Gannon provided the following statement by email on Wednesday:

U.S. Department of Homeland Security officials informed the State Board recently that they have no information that any attempted hack of a third-party vendors’ election systems affected North Carolina. DHS officials do not have any evidence that hacking affected VR Systems’ software used in North Carolina, but they could not rule it out with 100 percent certainty. The Department’s review appears to be ongoing.

VR Systems’ electronic poll book software is not currently certified for use in North Carolina, but it was certified for the November 2016 elections and used in 21 counties. The State Board must complete its investigation of the e-poll books’ malfunction in Durham County before it considers whether to certify the software for future use.

Western North Carolina Congressman Mark Meadows is criticizing National Security Advisor H.R. McMaster's comment at a White House press briefing regarding the Western Wall, which is located in the city of Jerusalem.  McMaster declined to tell reporters whether President Trump believes the wall is part of the state of Israel, calling it a "policy decision."  The Western Wall is one of the holiest sites in Judiasm, and is part of land Israel seized during the Six-Day War in 1967.

The founder of the private security firm Blackwater was allegedly involved in a secret meeting with a confidante to Russian President Vladimir Putin.

President Donald Trump's former campaign chairman, Paul Manafort, secretly worked for a Russian billionaire to advance the interests of Russian President Vladimir Putin a decade ago and proposed an ambitious political strategy to undermine anti-Russian opposition across former Soviet republics, The Associated Press has learned. The work appears to contradict assertions by the Trump administration and Manafort himself that he never worked for Russian interests.