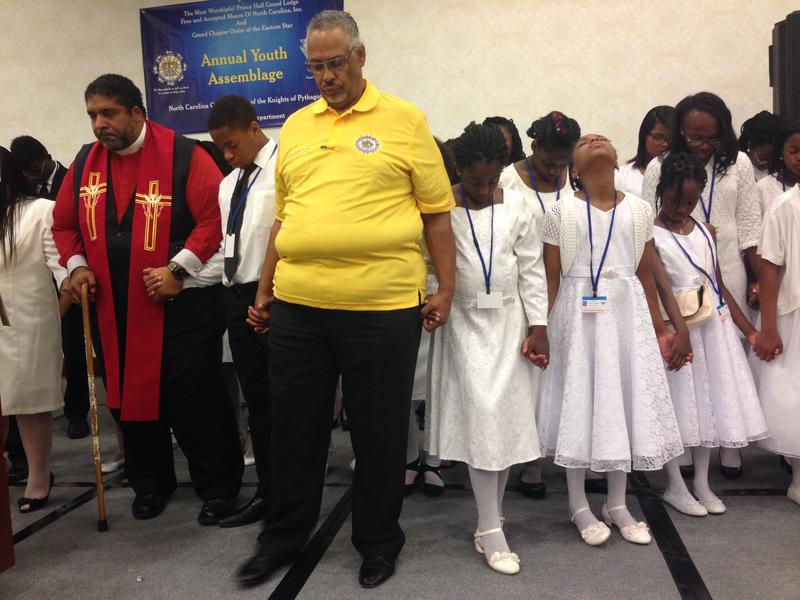 Flanked by a group of children from the North Carolina Prince Hall Mason Youth Assembly in Raleigh, the president of the state's NAACP spoke poignantly Friday morning about the recent deaths of two black men and five police officers thousands of miles away.

The Rev. William Barber told the crowd it’s possible to have deep concern, hurt and outrage for victims of all three shootings.

"I've tried for the last three days to find sane words to explain insanity," Barber said. "Rather than love and humanity, we’re seeing hate and inhumanity and death; violence and death and terrorism."

On Tuesday, Alton Sterling, 37, was shot by police in Baton Rouge, Louisiana. The following day, Philando Castile, 32, was shot and killed in suburban St. Paul, Minnesota. And late Thursday night, a coordinated sniper attack in Dallas killed five police officers during a peaceful rally to protest the recent shootings of black men.

Elijah Bazemore, Grand Knight Director of Piedmont and Western Region of The Prince Hall Masons, helped organize the youth conference and said the recent incidents are traumatizing for children.

"We as a society don’t know how to embrace what’s going on in terms of providing that therapy, providing that nurturing to help them understand what it is we are experiencing right now," Bazemore said.

Barber, who said he’s received death threats over the years, said issues of police brutality, racial disparities and the criminal justice system must not continue to be swept under the rug. He also defended police officers and expressed support and comfort to the families of the officers killed in Dallas, as well as the families of Castile and Sterling.

"Even if we can’t fix it all, shouldn’t our children see us at least trying to fix it?" he added.

Vigil for Justice in Policing, Moore Square, 200 S Blount St, Raleigh. Fri. 7/8, 6:30 p.m. Vigil to be followed by a community action planning discussion led by Policy Matters NC and the Justice or Else Movement.