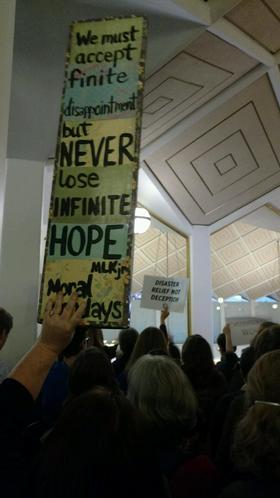 After an acrimonious day that led to protests and arrests, lawmakers are likely to give final approval Friday to bills that would remove executive powers.

On Thursday, hundreds of protesters gathered at the N.C. General Assembly to voice their opposition to these Republican policy proposals and chanted in unison, "Shame! Shame! Shame! Shame! Forward together, not one step back!"

"It’s just unconscionable, it’s unethical," said Yevonne Brannon, a voice among the protesters. "And it doesn’t allow any input from the public, or even the legislators haven’t had chance to read these bills or vet these bills or really even have a discussion."

Brannon was not among the at least 20 people who were arrested. Protesters disrupted both the House and Senate chambers. Leaders had to call recesses, and clear the galleries.

The Senate bill is a proposal to eliminate the state board of elections, enhance the role of the state’s appellate court, and create partisan judicial elections. The House bill would require the governor’s cabinet secretaries to receive senate confirmation, remove significant educational authority from the governor, and reduce administration staff positions by 80 percent.

"You're in danger of making bad policy because it hasn't been vetted in committee," said Billy Richardson, a Democrat from Cumberland County. "This legislation is too serious, it’s too important to the people in the North Carolina. Remember, people thought we were coming up here to work on the hurricane, not on this kind of far-reaching legislation."

Democrats, at times interrupted by the protesters echoing the same concerns, have spent two days criticizing the content and the process of these proposals. They say this entire special session, the fourth of 2016, is unconstitutional. But Republicans say they have firm footing to proceed.

"I think anything we can do to restore a little bit of the authority to the legislature that they gave up in the 1980s, is doing a corrective action to partially rebalance what I think it a state government that has been way out of kilter," said Representative Jeff Collins, who is from Nash County.

Each bill moved through one chamber yesterday, and is expected to pass through the other body on Friday. This is proceeding in a General Assembly that has two Republican supermajorities, just weeks before Democrat Roy Cooper is set to replace Republican Governor Pat McCrory. 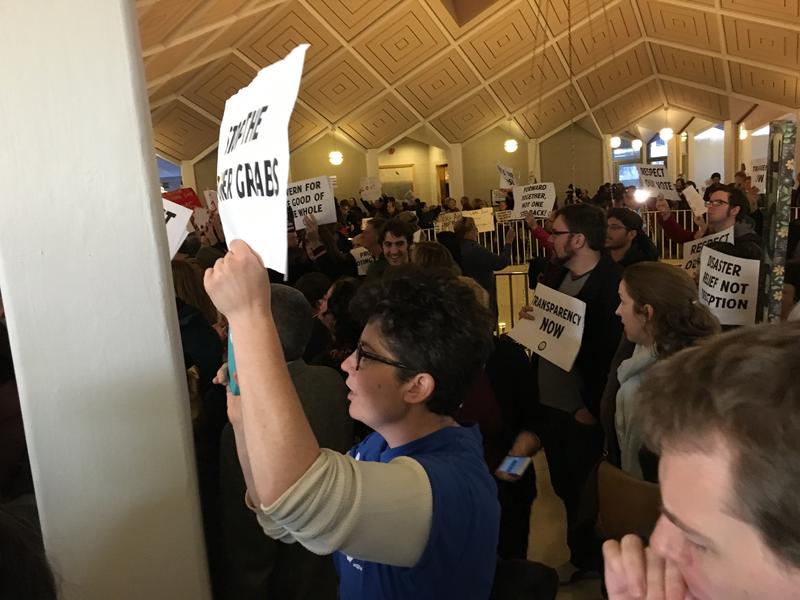 Republicans convened earlier this week to address disaster relief for victims of hurricane flooding and mountain wildfires. Once that was done, they pivoted to a major legislation.

"Just the speed at which they've moved through, ... is really mind boggling," said David McLennan, a professor of Political Science at Meredith College. "The two bills together are probably the most comprehensive set of bills that we've seen in 30 years that have changed the entire power relationship of the state government."

Under these two bills the Governor is largely removed from having significant influence over K-12 education – handing powers back to the State Superintendent. A Republican takes over that post next month. The requirement for cabinet secretaries to receive confirmation would keep this governor from appointing anyone too liberal, with an agenda that runs counter to the conservative ideologies in the General Assembly.

Roy Cooper harshly criticized Republicans on Thursday. "If I believe that laws passed by the legislature hurt working families and are unconstitutional, they will see me in court – and they don’t have a very good track record there," he said.

In a flurry of filings Wednesday night, state lawmakers put forward more than two dozen bills to be taken up at an additional special session that opened Wednesday afternoon.  It's not clear how many will get hearings and pass the Republican-controlled legislature.  At least some appear aimed at handcuffing incoming Democratic Gov. Roy Cooper.

A wild day at the North Carolina General Assembly began with bipartisan support for a $200 million disaster relief bill and ended with an unscheduled special session, dozens of new bills, and an effort to remove some authority from Democratic Governor-elect Roy Cooper.

In a chaotic scene of political theater, Republicans flexed their legislative muscles and proposed a series of provisions that would remove certain powers from the Executive Branch, including the Secretary of State and Governor.