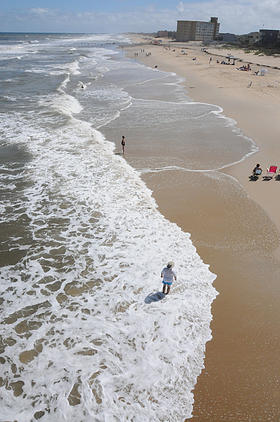 Governor Roy Cooper and Attorney General Josh Stein – both Democrats – are calling for the federal government to grant the state a waiver from the Trump Administration’s recently released plan for offshore oil and gas exploration.

Department of Interior Secretary Ryan Zinke granted such a waiver to Florida on Wednesday.

The move was seen as a political one. Florida Governor Rick Scott – a Republican - is against oil and gas exploration off his state’s coast, and is planning a run for U.S. Senate.

“I support the governor’s position that Florida is unique and its coasts are heavily reliant on tourism as an economic driver,” Zinke said in a statement. “As a result of discussion with Governor Scott’s (sic) and his leadership, I am removing Florida from consideration for any new oil and gas platforms.”

The argument that offshore oil and gas exploration harms tourism is the same one that has been made by dozens of coastal North Carolina communities.

Coastal tourism is a $3 billion industry in North Carolina.

Party affiliation largely determines what side of the debate the state’s elected officials are on – with one notable exception.

Republican Congressman Walter Jones opposes drilling. He represents the northern two-thirds of the coast, and disagrees with his fellow Republican members of Congress from North Carolina.

“Opening the Atlantic to seismic testing and drilling jeopardizes our coastal businesses, fishing communities, tourism, and our national security,” the letter said. “It harms our coastal economies in the near term and opens the door to even greater risks from offshore oil and gas production down the road. Therefore, we implore you not to issue any permits for seismic airgun surveys for subsea oil and gas deposits in the Atlantic Ocean.”

Other Republicans from the state – including representatives from the eastern part of North Carolina like David Rouzer, Robert Pittenger, and George Holding – support drilling. Senators Thom Tillis and Richard Burr are also behind the plan.

The issue is likely to play a role in at least one of the 2018 mid-term elections. Rouzer represents Wilmington and the southeast part of the state. A democratic challenger, Kyle Horton, opposes oil exploration. Horton, an attorney, lost a family member in the Deepwater Horizon accident in 2010.

In the shorter term, Cooper and other democrats face an uphill battle to convince Zinke to exempt North Carolina from the Trump Administration’s drilling plan.

On Wednesday, Cooper asked Zinke for an immediate meeting on the issue. The Governor has not heard back.

After Florida Gets Offshore Drilling Exemption, Other States Ask For The Same

After the Trump administration promised Florida that the state would be exempt from expanded offshore oil drilling, other coastal states had just one question: "What about us?"

From Oregon to South Carolina, governors and other leaders are publicly noting that Florida does not have a monopoly on picturesque coasts, tourist economies or local opposition to offshore drilling. But currently, it's the only state to have received a pledge from the administration that it won't be considered for new oil and gas platforms.

Cooper To "Pursue Every Option" Against Offshore Drilling

Cooper responded Thursday to news of additional opportunities proposed by the federal government for offshore energy development starting in 2019. He said in a release his administration "will pursue every option" to prevent drilling near the state's beaches, fishing waters and coastal communities.