More Than 600,000 Consumers Expected To Go ACA Shopping In NC 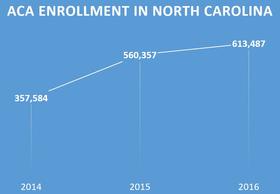 Beginning this week, hundreds of thousands of North Carolinians will again shop for health coverage through the Affordable Care Act exchange.

Entering 2017, however, shoppers in this state will see fewer options than in previous years.

Listen
Listening...
/
Host Frank Stasio speaks with WUNC data reporter Jason deBruyn about what to expect in the ACA exchange.

Interest in the program has been high in North Carolina as more than 613,000 people enrolled in the program this year. However, these enrollees, on average, have been sicker than anticipated, driving costs higher than first predicted.

While double digit increases can cause sticker shock, Jonathan Oberlander, a UNC-Chapel Hill professor of Health Policy and Management, said there is more to the story. In some ways, the premiums that insurers initially set should have been higher from the outset. Actuaries with the health insurance companies struggled to accurately predict what costs they would incur from this new group of enrollees.

Furthermore, it’s important to remember that these marketplace enrollees account for the minority of all those who buy health insurance. Nearly two out of three working age adults in North Carolina buy health insurance through an employer, and these ACA rate increases to not affect them.

Federal subsidies also offset the costs of health insurance to low- and middle-income households, and consumers in North Carolina have benefited from these subsidies more than in nearly every other state. In addition, studies have shown that premiums were held down by about 7 percent in states that expanded Medicaid.

To Oberlander, 2017 will be telling. “The big question is what happens from here? Next year, do we have a modest premium increase, or do we have another sizeable increase? And none of us really can see in that crystal ball right now,” he said.

NC Doctors Just As Burned Out But More Likely To Own Their Practice, Survey Says

The announcement comes after months of internal debate at the state’s largest insurer. In May, BCBSNC announced heavy financial losses it incurred from individuals who buy these “Obamacare” plans.