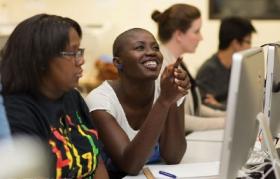 Alexandra Zagbayou was born in Montreal but returned to her father's homeland of Ivory Coast when she was 4 years old. Six years later, her family fled because they feared political persecution in the tense years before the country's civil war.

"We thought we would be in the U.S. for a summer. The summer turned into 15 years," she said.

Later, her parents returned to Africa while she and her sister stayed in Raleigh with their aunt and uncle. A few years after that, their uncle was killed.

Zagbayou's older sister became her primary guardian while she worked hard to finish high school and secure funding for college.

One summer, Zagbayou taught dance classes to homeless and displaced youth. This was when she first began to process her own challenging life experiences. She realized not only that she related to her students, but that she had come out the other side.

Today she helps run the Durham-based college-access organization, Student U. The program empowers students to pursue their own educational journeys despite diverse challenges.