It's looking more likely that Democrat Roy Cooper will become North Carolina's governor. By state law, Republican Governor Pat McCrory has the right to demand a statewide recount, if the margin is less than 10,000 votes. He got ahead of the game and made that demand last week before counties had finalized all votes. But as the tally stands now, McCrory doesn't have that right. The margin has expanded to 10,256 with results from nearly all counties official. 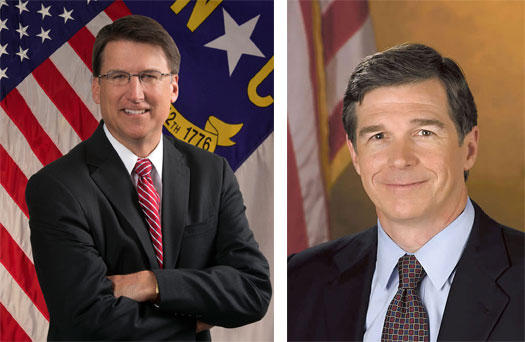 The state board of elections did grant McCrory's campaign a recount of about 94,000 votes in Durham County this week. Memory cards failed at five early voting sites and one precinct on Election Day. Election officials ended up calculating the numbers from paper tapes the machines created and manually entering those with observers from both parties watching.

The Durham County Board of Elections unanimously voted to dismiss the original request for a recount of these votes on the grounds that it lacked "substantial evidence to support it." Durham County, like all election boards in North Carolina, is controlled by Republicans. Those who supported the recount on the state board of elections said there's no harm checking these votes, but didn't expect the tally to change much.

McCrory's campaign manager Russell Peck said they're pleased with the state board's decision, and that they'll respect whatever the results show. Then again, if that vote tally remains over 10,000, McCrory won't have a choice.

An update on the still-unresolved race for North Carolina governor. Votes are being challenged and there's a call for a recount. Then, what's ahead for education with a newly-elected North Carolina schools chief and the search for a new Charlotte-Mecklenburg Schools superintendent.

North Carolina Governor Pat McCrory has officially asked for a recount in his re-election race against Attorney General Roy Cooper. The latest tally has him about 6,000 votes behind Roy Cooper as counties sort through complaints and certify election results.  McCrory said in his letter to the state Board of Elections he has "serious concerns of potential voter fraud emerging across the state." But what are the complaints and what is the validity of them?

North Carolina Governor Pat McCrory has filed for a recount in the close race against Democratic opponent, Roy Cooper, for North Carolina governor.

The votes are still being tallied in North Carolina's governor's race.  Governor Pat McCrory trails Roy Cooper by more than 6,000 votes. McCrory's campaign has disputed results in 52 counties alleging voter fraud. We wanted to ask the McCrory campaign about its complaints, but no one from the campaign responded to WFAE's interview requests. However, North Carolina Republican Party Chairman Robin Hayes did and spoke to All Things Considered host Mark Rumsey.