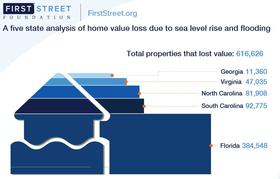 According to a new analysis released by First Street Foundation, properties in five coastal states from Virginia to Florida have lost a combined $7.4 billion in value in the decade from 2005 to 2016.

Relatively speaking, North Carolina has not seen as much value decline, in part because the coastline in North Carolina isn't as developed as areas in Florida or South Carolina.

"It is one thing to project what the future impacts of sea level rise could be, but it is quite another to know that the market has already responded negatively to this threat," said Steven A. McAlpine, head of Data Science at First Street Foundation.

Below is an interactive look at the most affected ZIP Codes, as well as the cities most impacted by sea level rise flooding.

Report: Entire NC Communities Will Be Affected By Sea-Level Rise

In 30 years, more than 15,000 North Carolina homes will be chronically inundated, meaning they're flooded about every other week, according to the Union of Concerned Scientists. The nonprofit advocacy group released a report today showing where and when sea-level rise is likely to impact residents' daily lives.

A report on sea level rise in North Carolina points to dozens of coastal communities that face chronic flooding over the next century.

Sea levels are rising faster than anticipated and our state’s beaches are particularly vulnerable. Yet we have no long-term strategy to deal with this. Mike Collins talks with experts about what the future may hold.

North Carolina's inland cities could have an unforeseen influx of residents from the coast due to sea level rise.

Coastal Carolina officials may not be willing to prepare for climate change until it's too late, according to a new study out of N.C. State and Appalachian State Universities.