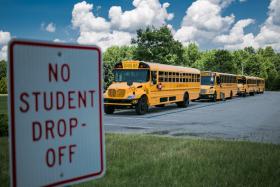 More schools are canceling classes next Wednesday as teachers prepare for a rally at the legislature.

Orange County and Iredell-Statesville schools will join Wake, Durham, Chapel Hill-Carrboro, Guilford and Mecklenburg schools in closing on May 16.

School administrators determined that teacher's requests for personal days had reached a critical mass that could not be filled by substitute teachers. Wake County, for instance, received more than 2,500 requests for personal days on May 16, while a typical day receives 500 requests for sick or personal leave, according to Wake County Schools spokeswoman Lisa Luten. The district's students won't make up the class time because they are already in school more than the 185 days that the state legally requires.

The rally is being organized by the state's association of educators, whose members are unhappy with the Republican-controlled legislature's decisions on teacher salaries and school funding.

Republican leaders have largely panned the rally. In a conference call this week, Senate president Phil Berger compared it to a teacher strike, which is illegal in North Carolina. And House speaker Tim Moore accused the teachers of playing politics. They say teacher pay has increased significantly since Republicans took control of the legislature.

Even With Raise, NC Teachers Still 9.4 Percent Below 2009 Earnings

North Carolina teachers are expected to get a raise of $891 this year, on average, which would bump the state up two spots when compared to other states.

Teachers in Arizona are protesting for higher pay, while Kentucky educators rallied at their state capitol this Friday. The same day, Oklahoma teachers ended a 9-day walkout, rivaling the length of time West Virginia teachers left their classrooms last month. Distressed teachers seeking higher pay and better funding for education have created a movement in red states, leaving some to wonder, will North Carolina teachers join in next?

Now that the state House has released its plan for teacher pay, there are three plans before lawmakers as they continue budget negotiations. Here are the basic differences:

Listen
Listening...
/
Gov. Roy Cooper proposed 5 percent average pay raises for teachers for each of the next two years.

Gov. Roy Cooper proposed average pay raises of 5 percent for teachers this year and next year in his upcoming budget. He made the announcement Monday at Collinswood Language Academy in Charlotte, surrounded by teachers.

Gov. Cooper says the two-year teacher pay raise will cost the state $813 million and he says taxes would not be raised to make it happen.