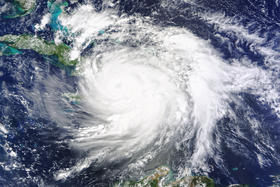 Gov. Roy Cooper made another visit to Kinston as it continues to recover from Hurricane Matthew.

The city was one of the hardest hit from the storm's record floods in October.

Kinston mayor B.J. Murphy said both state and federal officials have assured him of disaster relief funds. But he told the governor it's more urgent to start talking about flood mitigation measures along the Neuse River because implementing them could take years.

"What we understand is building a dam or dredging the Neuse, or whatever it's going to take, is a much more difficult conversation to have than, say, spending disaster recovery money," he said.

Still, he wants to push from disaster relief to conversations about flood prevention. He pointed to an Army Corps of Engineers report on flood mitigation from the 1960s, after which it took more than 15 years to implement one of its recommendations.

"That's why we need our governor, our state legislators, our federal legislators and our president on the same page when it comes to the flood prevention measures that should happen along the Neuse River basin," he said.

The 36-year-old Murphy has lived in Kinston during four of the worst floods in the city's history.

'Shock And Disappointment' Over Lack Of Matthew Relief Funding

Listen
Listening...
/
Jay Price reports on the slow recovery some cities are going through after Hurricane Matthew.