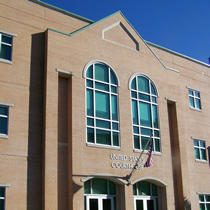 Eleven years ago, Mike Easley was North Carolina's governor, the Carolina Hurricanes began with what would be a Stanley Cup season and Apple had yet to unveil the original iPhone to the public. And on December 31st, 2005, North Carolina Eastern District Judge Malcolm Howard assumed senior status, a form of semi-retirement granted to U.S. federal judges.

Since then, Howard’s vacancy has yet to be filled.

"That vacancy has remained open for 3,800 days," University of Richmond Law Professor Carl Tobias said. "It isn't funny for the judges of the Eastern District or the people who live there, or the two nominees who have not been confirmed. So, I guess it's just pathetic is what it is."

The United States has 94 federal courts, 13 appellate courts and one Supreme Court. There are hundreds of judges who serve on the federal bench. They are nominated by the President, confirmed by the U.S. Senate, and receive lifetime appointments.

There are currently about 90 vacancies due to retirement, the slow pace of bureaucracy and the increasing political nature of the judicial system. Of those current vacancies, the Eastern District’s opening is the longest in the nation.

The unfilled position has been open four years longer than any other unoccupied seat in the nation.

Listen
Listening...
/
The longest judicial vacancy in the country is in the Eastern District of North Carolina, where they have been one judge short, for more than 10 years.

"It puts more pressure on the other judges, it means that civil trials take longer to secure for litigants, evidence becomes stale, people don't have their day in court," Tobias said. "Justice delayed is justice denied."

The Eastern District has four full-time judges allocated to it but has operated with just three for more than a decade. An official with the district declined an interview request, but said that senior judges are being pressed hard. Judge James Carroll Fox, who turns 88 this fall, is currently working a full caseload.

The vacancy amounts to a judicial emergency,  according to the Administrative Office of the U.S. Courts, law experts and staffers within the Eastern District. They say help is needed.

"We converse with the judges on the bench, and there is not a judicial emergency from the standpoint of their caseload," Burr said last month.

Before a nominee can get congressional approval, U.S. senators must turn in their "blue slips." Republican Richard Burr refused to do so, and that’s halted any nomination from advancing.

"To make a nomination right now is overtly political … there has never been district court judges nominated this late, who got consideration from the U.S. Senate," Burr added.

Over the years, President Obama has nominated two people to fill this seat. The most recent nomination came earlier this spring when Obama offered up former state Supreme Court Justice Patricia Timmons-Goodson, who is widely respected.

But just as senators have blocked Merrick Garland from the U.S. Supreme Court, no progress is expected on Timmons-Goodson’s nomination. This issue is already a topic in Burr's re-election bid playing out.

"It's certainly political, we all know that," said Democratic U.S. Rep. G.K. Butterfield, whose district extends from Durham to Elizabeth City to New Bern. "It smells of racism."

"The judiciary must be a diverse institution," he said. "We cannot have an all-white federal district court in the Eastern District of North Carolina that is 35 percent African-American. That is unacceptable."

For Butterfield, it's about race. Burr cites politics. And other observers say it's well beyond time to fill the void.

Protesters with the "Moral Monday" movement plan demonstrations at the home-state offices of North Carolina's U.S. senators to protest their opposition to President Obama's nominee to be the nation's next attorney general.

The North Carolina branch of the NAACP says it will hold protests Monday afternoon outside the Raleigh and Charlotte offices of U.S. Sen. Thom Tillis. Protesters will also demonstrate outside the office of U.S. Sen. Richard Burr in Wilmington.